Over labour weekend we walked the track over Blind Saddle to Quail Flat in Kā Whata Tū a Rakihouia (the Seaward Kaikouras). We chose this one because Kaikoura had the best of the weather at the top of the South, and we could visit numerous historic huts. From the Inland Road south of Kaikoura, we parked at the Kahutara River and walked the track over Bushy and Blind Saddles into the Waiau-toa, Clarence River as far as the Quail Flat homestead, and back.

Given that we spent the weekend walking the rugged four-wheel-drive tracks you could say this was more of a hut bagging mission than pure tramping, but we walked some decent kilometres (around 20 kms per day) and elevation (1190m over Blind Saddle) got some great views and realised the opportunity for many more visits back for further exploration. I also learned that this gets you into the Molesworth East-West route, which is on the list for another time. We met some great people, and all the drivers we met were respectful of walkers and of the tracks.

Getting There Blind Saddle to Quail Flat

It’s about 3.5 hours’ drive from Nelson to Kaikoura, heading East on the SH6 then taking the SH1 South from Blenheim. We traveled down on Friday night with a stop for an excellent dinner at the Captain’s Daughter in Havelock and spent the night forty-five minutes North of Kaikoura at the Store Camp in Kekerengu. We pitched the tent amongst the pine trees, put our earplugs in to drown out the rumble of the trucks on the SH1 just beside us, and had an excellent sleep.

In the morning we enjoyed our breakfast from the best seat in the house – a giant picnic table at the beach near the facilities, and of course, being New Zealand, bumped into someone we knew.

We set off, and after a cake and coffee stop in Kaikoura, took the Inland Road South as far as the Kahutara River bridge. Just before the bridge are some information panels, where we took a right turn to drive up the river gravels a short distance before parking by the locked gate.

This was my first time into the Clarence. Our trip straddled the Kā Whata Tū a Rakihouia Conservation Park, and further down towards the river itself into part of the Muzzle Station grazing concession. DOC has an excellent Clarence Visitor Information leaflet explaining some history, geology, activities, huts and do’s and don’t’s. The Ngāi Tahu website has a great report about the Māori history of the area, and DOC’s Clarence Walks page has more information about the route.

You can take a vehicle into the conservation park by payment and prior arrangement with Muzzle Station, who give access to the gate. You’d better make sure your vehicle can handle the steep hills and rugged tracks though! When we arrived there were a multitude of large four-wheel-drive vehicles with trailers parked up inside the gate, which presumably transported smaller vehicles for the trip over Blind Saddle.

The walk up to Blind Saddle was a solid 1000m climb. We left the car park at around 11.15 am and reached the saddle at 1.30 pm – a sterling effort for such a grunt we thought. Crossing the fence from the car park, we tried to ignore the few rotting deer carcasses left lying around I imagine, by the small minority who are not at all representative of the rest of the hunting community. The track began with a climb up to some farmland, and a gentle, dare-I-say-it flat section, before climbing again to a forestry section and on to Bushy Saddle.

After what seemed like a particularly steep straight, just after Bushy Saddle it was out in the open again before a series of (yes, steep) switchbacks where we got some excellent views back across the farmland and coast behind us, and a taste of what was to come off to the left.

We were passed by a few vehicles trundling carefully up the (recently graded) track and made a pact with ourselves that we’d only get a lift if one was offered – which it wasn’t.  The sun came out periodically and things really started to heat up. As we sidled around Driving Spur some puffs of cloud rose up from the valley below.

When we saw the sign for Blind Saddle we were so relieved! That is until we realised that Blind Saddle itself was a few hundred metres (and more climbing) up the road. Bearing in mind we hadn’t taken a break yet, lunch at the top seemed like a sensible idea. We backtracked a little to escape the wind, ate our lunch and waved to the passing drivers.

The slog up was definitely worth it for the fantastic views of the Inland Kaikouras all the way down on the other side. Leaving the saddle at 2.15 pm we enjoyed the amble down and reached Tentpoles historic hut about an hour later. It is one of a number of historic huts in the area which DOC detail in their Clarence Historic Huts brochure.

Tentpoles is a small corrugated iron hut that is thought was built in the late 1920s. It was the last stop for musterers running stock from the Clarence over the saddle towards ‘the front’. Ten bunks were squeezed into the hut back then, but there are fewer now. I didn’t actually think to count them (four maybe?) which were extremely rustic without mattresses. We tented here on our way back out. The small stream nearby had a trickle of water (I imagine it may not in summer) and there is no toilet.

Half an hour or so from Tentpoles hut we had completed our first couple of small river crossings for the weekend (no dry feet days this weekend!) and at just before 4 pm arrived at a beautiful flat, grassy spot and the Bluff Dump historic hut and by comparison the palatial 12 bunk Warden hut right next to it. According to the DOC information, it is 18 Kms from the car park to Warden hut, which took us around four hours and forty minutes, including stops.

Bluff Dump historic hut was built in 1928 and was used to store goods brought over the saddle, which was especially useful in winter when snowfall prevented crossing. There are no bunks in the hut now, but plenty of room in Warden hut next door which has a fireplace and a lovely veranda. (I didn’t think to take a photo I’m afraid).

We enjoyed a break, used the very clean facilities, and chatted with the lovely folks at the hut who had driven in, and knew almost everything about everyone in the area this weekend. Upon signing the hut book, we noticed some good friends of ours had biked in yesterday, and we hoped we’d catch up with them somewhere out there.

We left Warden hut and started following Seymour Stream. About twenty minutes later as we neared the volcanic ‘black spur’ of rock, we bumped into our friends on their bikes and we all camped at the historic Black Spur Slab hut. This beauty is nestled in a sweet flat spot in a grove of poplar trees on the Black Rock stream around the corner from the track and Seymour River. There were bunks but no mattresses and a toilet which you’d only want to use in an emergency. 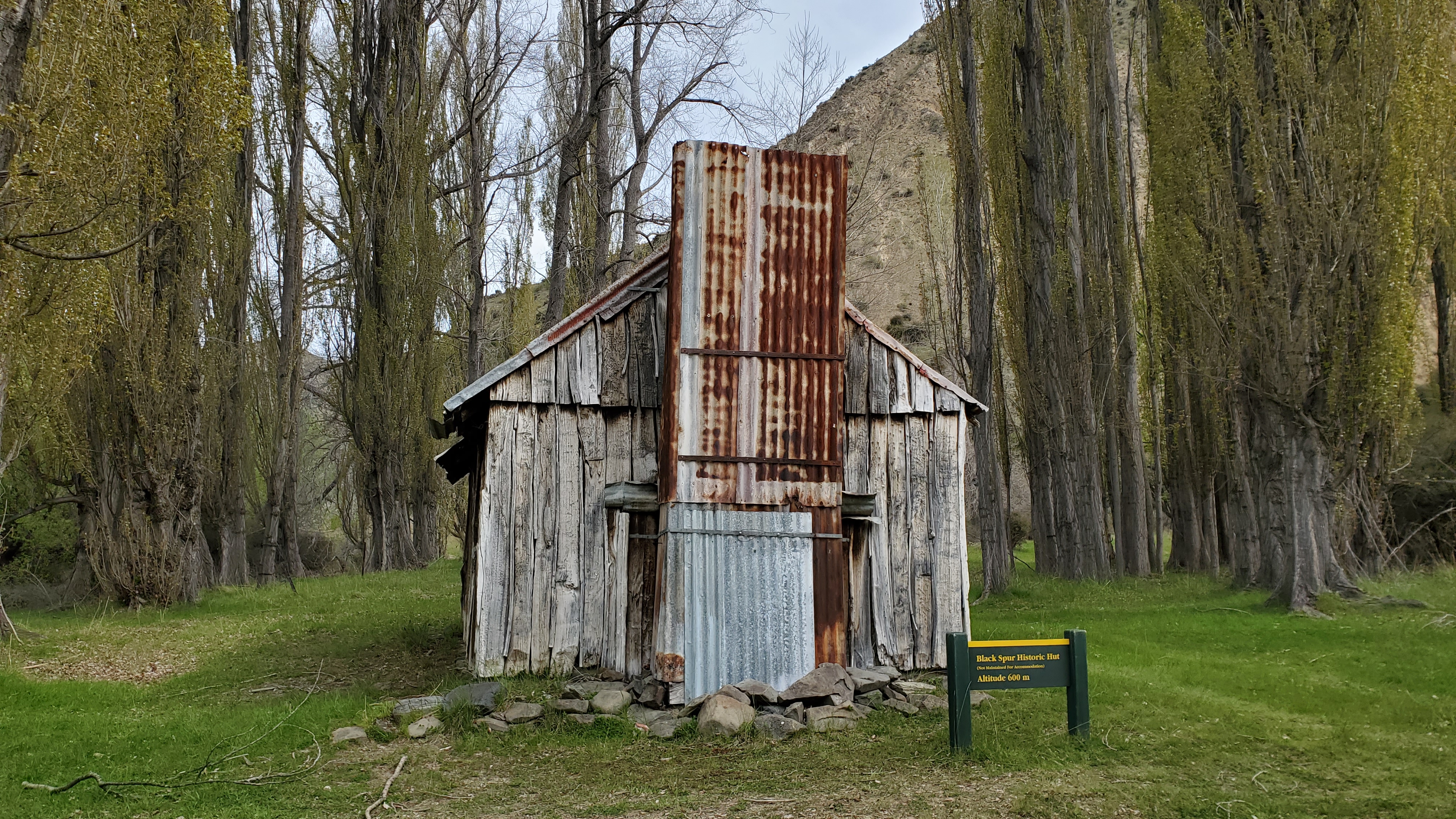 In the morning we left the tent up and at around 10 am headed towards the Clarence River with a day pack. The weather was glorious and it was lovely to wander the track crisscrossing Seymour Stream. On our friends’ advice, we walked the track all the way to the Clarence, passing through a cool section on the final bend near the confluence. It took about an hour and a half.

Unfortunately, we couldn’t get all the way around to Forbes hut from here, which would only have been a few hundred metres downstream. The topo wasn’t representative of the river any more, and a couple of crossings of a braid of the Clarence were required. It was running fast and cloudy and we assumed was deeper than it looked, so we didn’t bother to give it a go.

Instead, we backtracked to the turning we passed earlier and took the overland route to Forbes hut. It took about an hour to retrace our step and head over to Forbes hut.

The ten-bed Forbes hut used to be Seymour hut until it was re-named as a memorial to DOC worker Kim Forbes. What a great place for a memorial, on a huge grassy area next to this wonderful river. This weekend, the hut was home to a group of local hunters and their families, and we chatted for a while before making our way over to Quail Flat.

A possie of four-wheel drivers had tented by the river near Forbes hut, and we all slowly made our way to the Quail Flat historic homestead, which has been around since the 1860s. Today, the site has a great information board, a beautiful cob cottage, a large, barn and several other small buildings. It is used for accommodation by workers but isn’t available for public use, although it’s worth poking your nose in for a quick look.

At the homestead we bumped into a couple more cyclists who we knew – the outdoor folks of Nelson seemed to have the same idea and head for the sunshine. The fruit trees near the cottage provided the only shade, and we ate lunch in the long grass with a cool breeze.

After lunch, we wandered the couple of hours back to Black Spur Slab hut and were back at the hut by 4.15 pm.

Back at Black Slab, we decided we’d make a head start on the climb up to Blind Saddle, and packed away the tent. Thankfully the climb isn’t nearly as bad going back out, only about a 500m or so. The lovely folks at Warden hut shared their lollies with us as we passed through and we took a little break with them. By 6.30 pm we had set up the tent outside Tentpoles, aired our belongings and fetched water from the little stream down by the track.  We spent a lovely evening uninterrupted by sandflies.

In the morning we woke early and were ready to go by 8 am. The temperature was fresh – perfect for the climb, and we reached the saddle by 9.15 am. An enthusiastic cyclist passed us, no doubt looking forward to the epic downhill he had coming!

By 11.20 am we were back down at the Kahutara River. There was a frenzy of smelly clothes off – summer clothes on, as it was beautifully hot and we were off to the beach! We parked up by the Kaikoura Seafood BBQ and got the last free table for lunch.

It was too nice a day not to have a swim, so we donned our togs and tentatively dipped our toes in. It was freezing!! Even though I have made a new habit of sea swimming this spring, the temperature in Kaikoura was a few degrees below Nelson I’m sure. We managed a bracing thirty-second plunge then sat on the warm rocks to dry out.

What a great weekend! We can’t wait to get back there – but next time it’ll probably be in a vehicle so we can explore more 🙂