It was a really windy last night, and whilst not as bad as my first wild camp, I woke up plenty of times. It was quite a cold night, so I had condensation on the outer fly off my tent this morning. I woke at 6am, made a coffee and ate a Cliff bar for breakfast (the closest thing the UK has to an OSM bar). It was peanut butter flavour and not really very tasty, but the length of time it took me to eat, told me it would keep me full for ages.
As I was packing up I broke one of the fabric hooks on my solar panel, which I use to strap it to my backpack…grrr. I spent 20 mins sewing it back on. I left camp at 7.35am.
The trail was undulating cliffs again. It was a mix of two thirds lovely trail, and a third overgrown awful trail of huge bracken, stinging nettles, cow parsley, grasses or all of the above. The overgrown stuff is terrible for my hayfever, and for ticks. I picked 14 off me in total today, none of which had bitten me (I’m desperately hoping none have gone into my hair or any other place I can’t see!). My legs tingled with all the stings from the nettles. 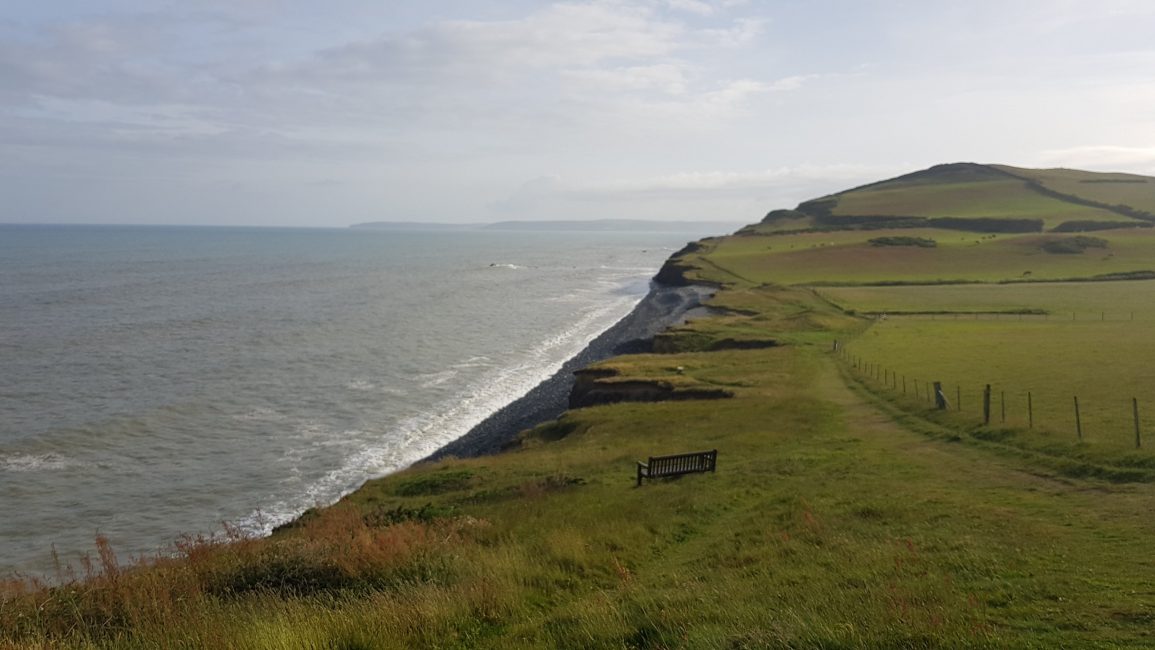 A few Kms in, the path went down to a pebble beach for a short distance before rising up again. I could see Clovelly in distance. Weather-wise it was cool temperatures and there were a couple of light showers. I got wet feet for the first time this trip trudging through all the wet overgrown stuff.
I reached the valley of Peppercombe at 9.30am. This is a National Trust area, and has cliffs of 280 million years old red mud/sandstone which isn’t found anywhere else locally. 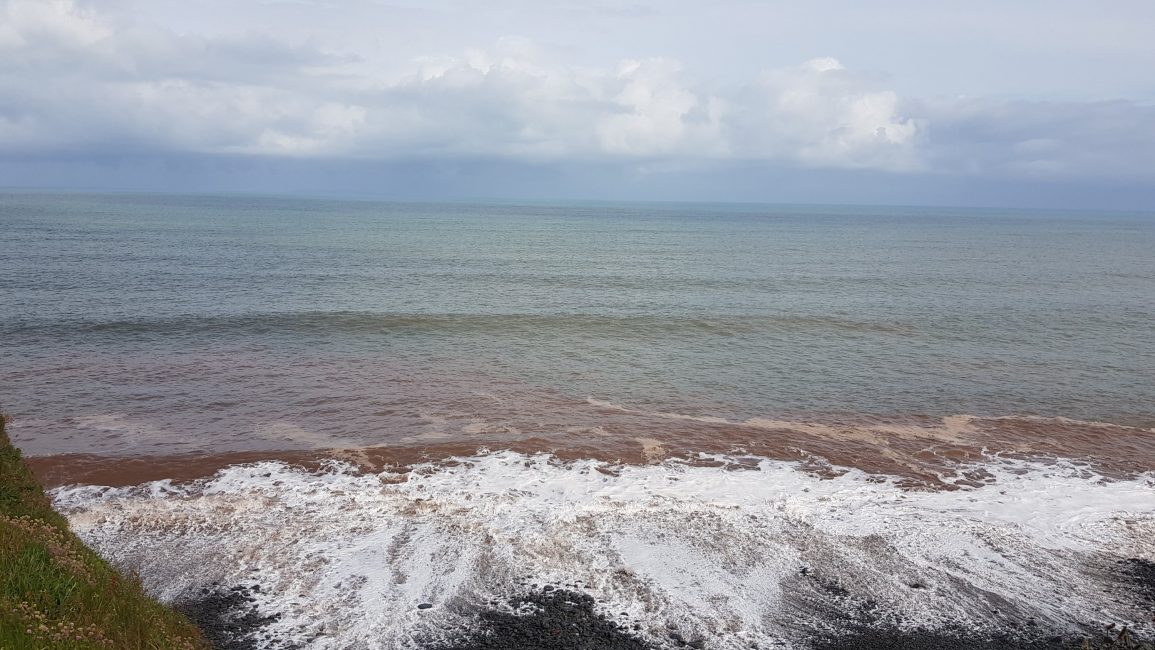 Near Peppercombe – the sea is red

There was a lovely little coach house with tables for a rest, and a nice flat spot for potential wild camping. After Peppercombe there was a lovely mossy woodland walk. This led to Bucks Mill hamlet and Barton Wood. Just before Clovelly the trail turned into a beautiful historic old road section known as The Hobby.

I reached the village of Clovelly 12.30pm. It is surely one of the most picturesque little villages in Britain. It is built on just a few cobbled streets, down a very steep hill to the sea. I walked down as far the lookout point but didn’t go all the way down to the beach.
On the way back up I went into the Cottage Tea Room for my first clotted cream tea of the trip, but they didn’t take cards (!!) and I didn’t have enough cash. So I went over the road and had a Blackwell’s award winning pasty. It was OK – generously packed with meat and potatoes, but personally I like a bit more flavour and pepper in my pasty.

I left at 1.10pm. A passer-by warned me about ticks on the next section so I put my waterproof trousers on at Mouthmill, and took them off 10 minutes later as I was overheating. She wasn’t wrong though, I got most of my ticks from this overgrown stretch to Windbury Point. After this section there was respite, and it was into fields. I was getting pretty tired my this point and could see the radar station in the distance, willing the Kms away. When I got to the radar a station there were views to back to the Devin coast all the way to Morte Point & Woolacombe

The final notable destination today was Hartland Point, the most Northwesterly point in Devon. I bought a piece of carrot cake for breakfast tomorrow with my remaining cash (no cards) from the little kiosk, secretly wondering if it will last that long! After Hartland Point I continued on for a couple of Kms incorporating more hills, and I found a great flat spot to camp with a spectacular view at Smoothlands near Gull rock.
I was intending to stay at a campsite in Stoke about 3kms on, but my tired legs and feet wouldn’t take me any further!

It’ll be a pretty windy night tonight as the site is pretty exposed, but at least I don’t have to walk any further today! As I write there is a huge dark cloud bank coming in. I haven’t seen the weather report for days… hoping it doesn’t rain! I made dinner and retired to my tent early.