The Myra’s track – Mt William – Cedar Creek Saddle loop is a great, short day-walk close to Westport. Even though you drive half the elevation, it’s still a good walk, a reasonable climb, and has excellent views. It starts opposite the Coalbrookdale walkway on the Denniston Plateau, so you are treated to some interesting variety in the scenery not only on the walk itself but on the drive up too. Our 13 km loop incorporated some very cool mossy forest, a good portion of rocky tops, some route-finding, and a walk back along easy gravel roads. We loved it.

We started at 11.20 am, were on the tops 70 minutes later. With two 20-minute breaks, we were back at the car at 4.20 pm. You could do a return of Myra’s track for a much shorter walk. As it’s a West Coast walk – pick your day wisely for the weather, pack accordingly and take your PLB.

Getting there Myra’s Track Mt William

Myra’s track starts from just beyond the Denniston Plateau, about 25 km (25 min drive) North of Westport. If you haven’t been to this wonderful historic place before, I can’t possibly do it justice here. It is the site of a very successful coal mine (18-1900’s) 518m above sea level, famous for its extremely harsh living conditions and a terrifying 1670m incline railway, that brought people up – and coal down. If you’ve read the Denniston Rose you’ll know it already, and visiting it in real life after having read the book makes it even more special. Take a look at the wonderful Tohu Whenua website which captures it perfectly. West Coast NZ and DOC have further information to help you plan a trip.

From Denniston, continue on towards the Coalbrookdale Walkway. There is a larger car park by the Burnett’s Face area, but we parked in a smaller layby just before the bridge at the start of Myra’s track.

On the day we went, the road was closed periodically for a motorsport event. We were allowed up the hill during the gaps between the racing cars. I couldn’t tell you any more about it other than the vehicles we saw looked like fairly normal cars which had been made to travel very fast, with lots of noise.

We set off at 11.20 am on a gloriously sunny day with a gentle breeze – just how you want a West Coast walk to be. The car park is at roughly 520m and it’s a further 500m climb over roughly 2 km or so, to the trig at Mt William. The track was marked and easy to follow. Because it hadn’t rained in a couple of weeks it wasn’t muddy, but other reports we’d read mentioned it usually is. The initial section led us through a short strip of forest to an area of scrub where we crossed a gravel road before continuing in the open for a while.

We entered the forest again and after a little while, the climb got steeper. It was lovely, but fairly standard until we entered an enchanting mossy forest boulder garden, where streaks of sunlight fell across the giants and lit the small grottos. A little scrambling was involved to negotiate the rocky section but nothing difficult.

We were out of the forest by 12.30 pm and turned back to admire the views. The views across all the mining areas weren’t all that flash, to be honest, but it was a pretty impressive landscape. As we climbed the marked track, we saw the Mt William trig and took a sweeping arc to the right.

Starting with the more ‘natural’ views – to the North East we could see the mountains of the Kahurangi, then traced the Skyline ridge of the Old Ghost Road on the Lyell range. Next came the familiar lines of the Nelson Lakes National Park. Looking further South the Buller River in the foreground led to the escarpments of the White Cliffs and in the distance the Brunner and Victoria Ranges. To the South was the Buckland Peaks and the Paparoa Range, and heading towards the coast, Mt Rochfort.

To the West was the maze of roads across the Denniston plateau, then the tableland leading up to Mt Frederick. Further North we could see to Stockton and beyond up the coast and all the way up the William Range. We enjoyed a twenty-minute break in the sun, and as the breeze got up, made our way North East along the tops to Cedar Creek Saddle.

We left the trig around 1.10 pm. There is no trail and are no markers across the tops to the Cedar Creek Saddle to the North East, so we checked the route description we had printed from the Wildthings Trail Running website. As advised, we got our bearings and knew we wanted to keep to the Eastern side of the tops. It was still early, so we took our time, and marveled at the cool rock formations, as we ambled down to the saddle. As expected there were a few gullies to cross, but we kept right (East) and we had no problems finding a route across.

It was about 2 pm by the time we crossed the tops. Whilst heading down to Cedar Creek Saddle we stumbled across a couple of white markers, and once in the forest, the track was easy to follow along a ridge, but we kept our eyes peeled for flagging tape where it became less obvious.

As we climbed out of the Saddle again we came out into more open country again. The Wildthings route description had told us to take the trail to the West (left) of the high point. We climbed too high initially but spotted a couple of white marker poles behind us to our left which got us back on track.

We followed the poles down and found a couple of cairns indicating the route off to our right down into the forest towards the stream. Definitely keep your eyes peeled here, face the pylons on the rocky outcrop and head downhill by the cairn. It was 2.35 pm, so it had taken us about 35 minutes to walk through the forest of the saddle, out and down to this point.

The walk down through to the pylons road was flagged with tape and fairly unremarkable. I imagine it is usually pretty boggy, but we got off very lightly.

From here it was easy to follow gravel roads all the way back to the car. Some bits were steep, most of it was long and straight, and we crossed a few streams – it wasn’t unpleasant. A highlight was coming across a wasp that was attempting to drag a massive spider, at least twice its own size across the road. The only other people we saw were a couple of guys on motorbikes, and we hoped they didn’t run over the wasp/spider.

After an hour of decent-paced walking and, with about 10 minutes left to go, a nice big rock-with-a-view presented itself, so we had another twenty-minute break and finished our snacks. We got back to the car at 4.20 pm and headed back home to Nelson. We really enjoyed this little gem and were grateful the weather was good enough to let us get up there. 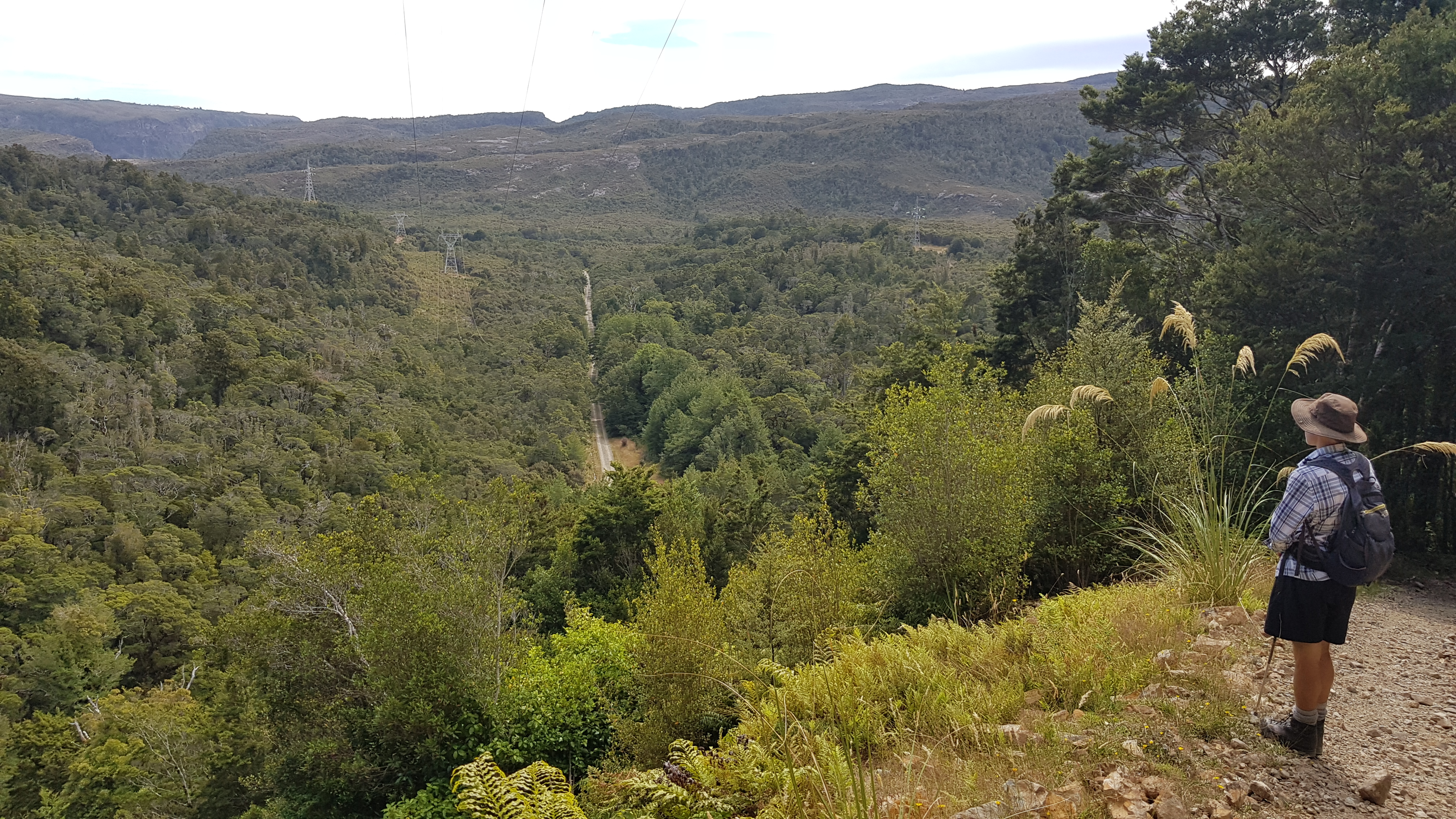 The easy walk back