I left the campsite at 6.40am this morning. It was another gloriously sunny day with a little bit of breeze – just how I like it. Out of Marazion there were a couple of little beaches, with epic views of St Michael’s Mount. The path was initially road walking out of Marazion, then through farmland. I noticed there were some excellent wild camping opportunities above Trenow Cove.

I arrived at Perran Sands, used the loo, and gave a decent contribution/donation as again, these toilets were being kept open by the community because the Council had closed them down.

The path changed again to walking through tall hedgerows and bracken, most of which were strimmed back. There were a couple of stretches of overgrown parts and one nasty tunnel of nettles, thistles and brambles – as I’m only wearing my running shorts and a singlet, it was a case of charging through as fast as I could.

When I reached Cudden Point there was a ‘money post’ – that is, a post with coins stuck in it. Mostly old ones by the looks of things. I have no idea why it would be there, but I jammed a penny in to a crack and went on my way. Next came Bessy’s Cove, which was lovely. Overlooking it, was a very beautiful old house on the headland, a wedding venue by the looks of it. I got a bit lost again here and there this morning, the signage wasn’t all that great, and there seemed to be lots of pathway options. I used my GPS on the phone a few times.

I rounded another headland and there was the wonderful and very lengthy Praa Sands beach. It was 9.15am. I stopped and had a break for 30 minutes.

Once I got going again I passed through Rinsey and Trewavas cove. There were some restored Tin mine building. By now I could see all the way around Mount Bay and back to Tater Du lighthouse and Mousehole (which I walked through a couple of days ago). I could see some huge cargo ships out to sea in the channel, some waiting to go into port, others sailing away. I must be close to a military base because there have been jets and choppers galore overhead today, unless we’re at war and I haven’t realised.

I arrived into Porthleven around 11.45. Porthleven is a gorgeous little village with a long harbour wall, protecting both an inner and outer harbour.

The stone houses were beautifully painted. There were lots of nice little cafes (including a Rick Stein restaurant), ice-cream shops, gift stores, galleries and a couple of pubs. I got a home made ice-cream from the deli – a mix of flavours, strawberry and basil sorbet (which was fantastic) and strawberry clotted cream. I left at 12.15pm. 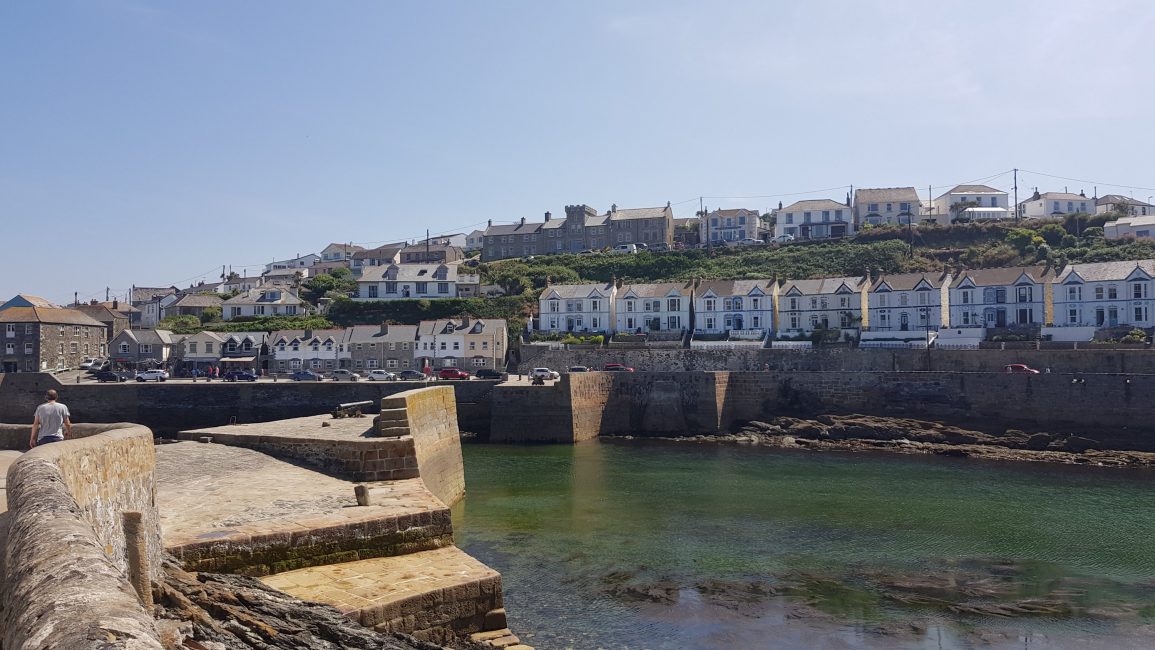 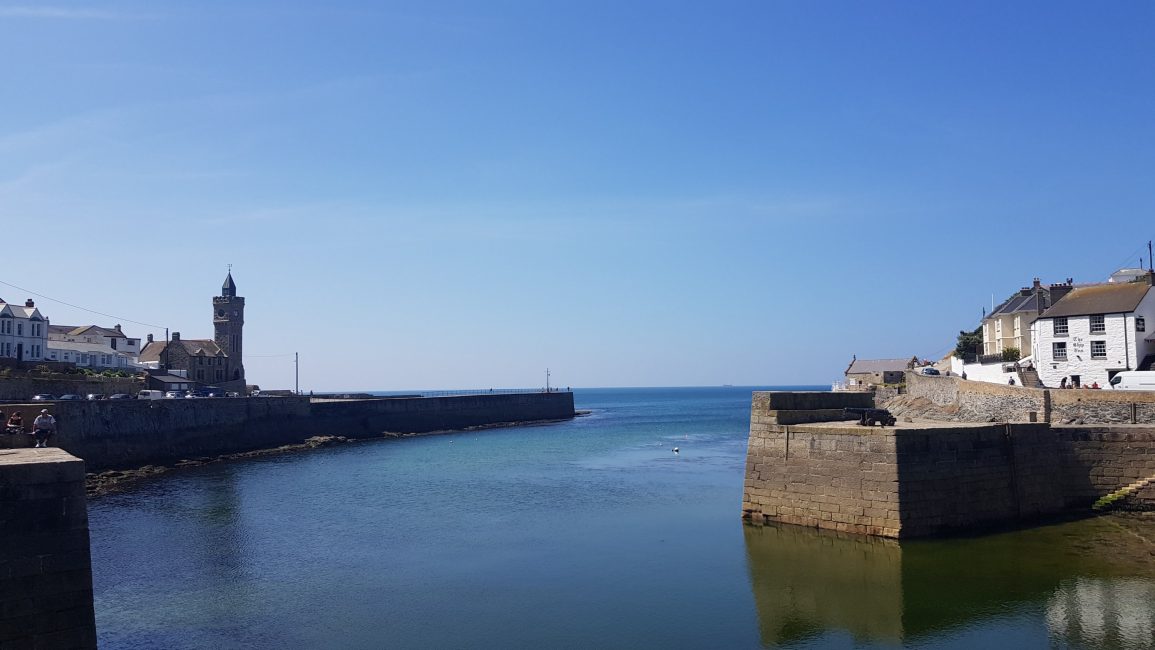 Next it was up and over to Porthleven Sands. There was a hefty diversion in place as part of the cliff had collapsed. I forgot to time it, but I’d say about 50 minutes or 4-5kms. Half of the diversion was spent in very lovely woodland next to the Loe lagoon. Back on trail and there was another little diversion later, which again I got a little lost coming out of.

It was an absolute scorcher of a day, and it had seemed like hard work despite not too many hills. I stopped at the café in Jangye-ryn for a very cold can of ginger beer (‘old Jamaica’ variety and pretty good).

Finally I came into Mullion Cove. I had planned a wild camp tonight so I had to fill up with water. I got a piece of banana cake for my brekkie tomorrow, and refilled my 2 litre water bottle and bladder. It was a hot, heavy climb out of the cove onto the headland. I stopped at around 5.30pm. It’s around 4 miles to Kynance cove, which I can remember from my childhood – I’m looking forward to maybe having a swim there in the morning!