I started the day today with a coffee and a piece of incredible banana cake with cream cheese icing, bought from the Mullion Cove tea rooms yesterday. I left my camp spot at 7.15am, and as usual had left no trace of being there, except a little area of flatter grass.

The first section was along the tops of the headlands to Kynance Cove. The sun was out, there was a brisk wind, and it was lovely walking across the heathland. There were quite a few large black and brown cows grazing in this section. Interestingly you can walk among them with a 99% certainty that they’re not going to do anything surprising. They don’t bat an eyelid as you walk through them, unlike the New Zealand scenario where they get jumpy, spooked, run away, or start to trot towards you.

There was a nice wild camp opportunity in the little valley at Soap Rock (I passed some great spots throughout the day). From there it was back in the clifftop and back to wild and rugged terrain, with rocky outcrops, heather and little grassy tussocks. There was quite a strong side wind, so I stayed away from the cliff edge for fear of being blown over.

Soon enough I saw the huge rocky outcrops in Kynance Cove. This beach is best seen at low tide, and I remember coming here with my parents when I was really young.

The tide goes out a long way to reveal golden sands with these huge rock outcrops in the middle, that you can walk around. Part of the beach is cut off at high tide. It’s possibly the most spectacular beach in England, and certainly one of my favourites. When I arrived the tide was in. There were swimmers just coming back from around the rock, and only a small section of beach to be had.

I marvelled at the view for ages, walked down to the little cafe, and watched a multitude of gulls circling in the breeze.

I waited in the sun until 9.30 for the café to open. I spent the time wisely by trying to find prickle in my foot from last night, but to no avail. I ordered a bacon and egg baguette and a smoothie, both of which were amazing. I’d been told the cream teas here were fabulous, but the smell of bacon convinced me to go savoury instead. I saved half the baguette for my lunch, and bought a Bakewell slice for tomorrow’s breakfast. I left at 10.20.

After a few ups and downs and numerous photo stops I arrived at Lizard at 11.30. This is the most Southerly point of the British mainland. I chatted to some volunteers at the National Trust office, and looked at the seals through telescope. Continuing on I passed the Lizard lighthouse and ate my lunch (2nd half of baguette) at the National coastwatch base at Bass Head.

The afternoon went really slowly and I was hot and tired. From Church Cove there seemed like lots of ups and downs, but actually it was nothing out of the ordinary. My contact lenses were covered in pollen today so I had to keep stopping to put eye drops in.

This stretch was inland a just little, and the trail took me through some woodlands and hedgerow sections. There was a polite notice from National Trust to say they aren’t trimming path fully as it’s glow worm breeding season…awwww, but it wasn’t overgrown at all compared to some of the North Devon sections.

I got to the ‘Devil’s Frying Pan’ hole in the rock (just before Cadgwith) at around 1.45pm. Cadgwith village was cute and had a few pubs, and a couple of little shops. It seemed like almost every house had a thatched roof. 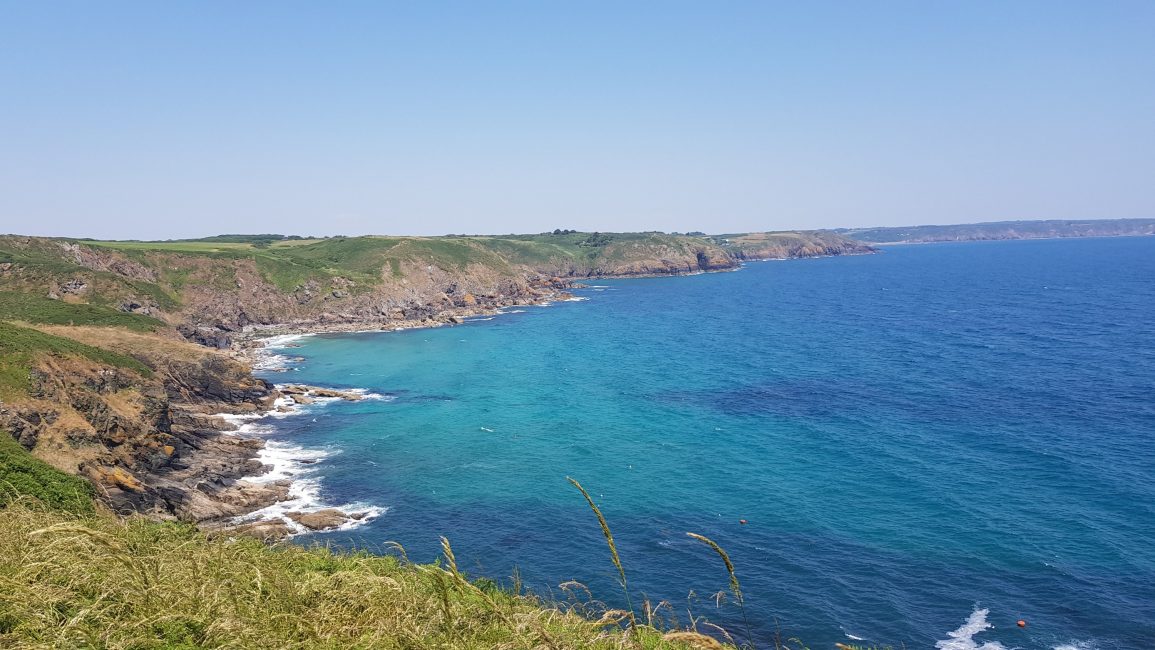 The geology had changed again now, into a stretch where schist and serpentine rock is found. It was slippy getting up and down some of the stone stairs. Just before I went down into Poltesco, I spent 20 minutes battling the horseflies. I my tactic is to let them land on you, then slap them.. they’re not fast enough to get away. If you let them buzz, and you just swish them away they persist and hang around you for ages.

I had a Mr Whippy at Carn Kennack beach, which was well deserved as there were quite a few hills to follow.
It seemed to take an age to get to Blacks Point, and really annoyingly I went the wrong way and had a little detour coming into Coverack. Once in the village, I had a cheese and ham toastie from Archie’s Loft cafe. I refilled my water and headed off out of Coverack.

I had my eye on tonight’s camp from the village, and it didn’t disappoint – an area of flat land just before the Lowland Point headland. My wild camp is at sea level tonight, and it’s a little bit breezy, so I don’t have millions of little bugs like the past few nights. I also have a small gathering of curious ponies to keep me company 🙂