A gusty breeze shook me awake at 4.30am this morning, so I luxuriated in bed for another hour or so before getting up. My seaside pitch was bathed in sunlight as ate my breakfast (a Bakewell slice from the Kynance Cove tea rooms). I watched four large tankers moored in the channel – I assume waiting to go into port at Falmouth.

I set off at 7.45. There were lots of excellent wild camp spots on the Lowland Point headland. I walked past the disused Dean quarry, where the path was pretty overgrown and I tore through some huge spider webs!

This led down to down to Godrevy Cove, then through the reeds on a footpath to farmland. As I was walking up the field, I met the farmer who asked where I was going. I said the coast path, and he told me there was a diversion from Dean quarry up and around his property because the path was out. I told him there had been no signs for a diversion and that the path was perfectly fine. He said maybe I should talk to the Council or SWCP about signage. I came out shortly afterwards at Rosenithon. Interestingly from there I had to climb over a large barrage blocking the way into his property. I remembered reading in the SWCP Facebook group something about a farmer being in dispute with the Council, so I’ll check the SWCP website for more info. 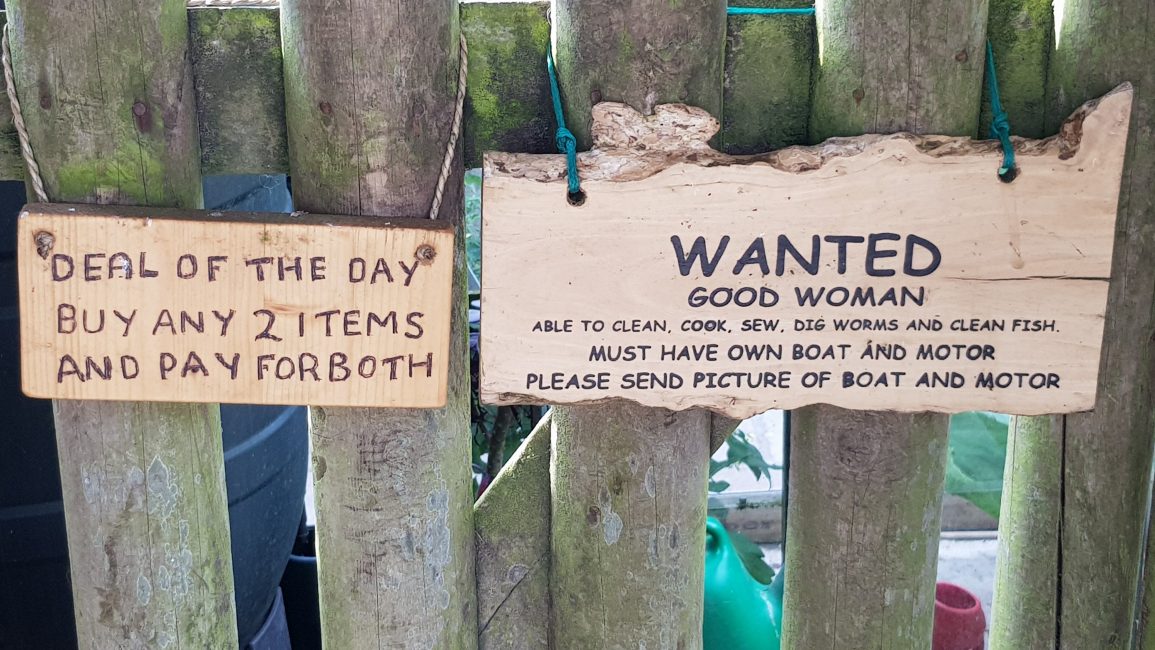 Anyhow, I continued on and found that at least someone in the village has a sense of humour. I had a wee smile as I started the road walk to the little village of Porthoustock.

After this there were more fields and road sections before Porthallow Cove. Reading the signage there, apparently the Cistercian Monks from Beaulieu Abbey (in the New Forest near where I was born) built a quay and fish cellars here in the late 13th Century.

I passed John’s weather forecasting stone, before climbing up on the cliff path again. The next stretch was pretty overgrown lots of tall brambles hidden in the bracken. At Nare Point the path opened up again, and I picked all the insects out of my clothing and assessed the scratches and nettle stings.

It was a little cooler today, with a bit of a breeze and there was a long strand of cloud as far as I could see – perfect walking weather. I rounded the headland and passed the National Coast Watch building. From better there were views across to Falmouth and up the Helford river.

By Trewarnevas Cliff the terrain had changed again into nice woodland. I opted to walk from Gillian rather than take the ferry over the creek, which was around an extra 5kms. That plan soon changed when I got to the path and saw that clearly no-one takes the path! It was a wall of brambles and nettles. I got stung and scratched some more, then promptly turned around and went to catch the ferry (as the tide was to high to use the stepping stones).

The ferry across is a nice little earner for the ferryman and was £3 pp or £5 min charge, for a 90 second journey. I paused in St Anthony, and had half a dry tortilla wrap (I’ve run out of all other food!). I climbed out of Gillian and onto the St Denis headland loop, where there were nice views of the coast and Helford river. I watched 4 falcons diving and chasing each other.

The trail soon went into woodlands again. Judging by the accent of most people I met, this is where wealthy Londoners spend their weekends. At 1pm I stopped in at The Shipwright’s Arms in Helford for a fish and chips lunch. Steve turned up in the pub (who I met in St Agnes, Gwithian & Marazion) and we had lunch together. Steve had walked on and off with Kerstin the past couple of days and I had caught up with them after my day off.

After lunch we wandered down to the tiny ferry. As we were crossing the Helford river, a couple of the locals told us we were looking at houses owned by Tim Rice on one side and Roger Taylor on the other… Nice.

Steve and I detoured into Glendurgan National Trust gardens. There was a gate straight from the beach path and no ticket office, so we had a wander round then went up to the café for an ice-cream. The gardens are lovely, with lots of species of plants from around the world. We left there at 4pm headed for Maenporth beach, where there were a couple of campsites (I really need a shower tonight).

We got into Maenporth at 5.30pm and enjoyed a gin and tonic in the slightly upmarket beach bar and grill. The sun was out and it was a great end to the day.
We selected the Tregedna Farm campsite based on the fact that it was only £5 for hikers – fantastic, even if the pitches are all on a slope. Looking forward to getting into Falmouth tomorrow. Apparently its supposed to be raining, so I’ll do my food shopping & have some cafe time.