I had an amazing sleep on my feather pillow in my wonderful bed! I woke at 8.15am (!) and made a delicious plunger coffee with freshly ground coffee, and ate two home made cookies, which was all available in my room. 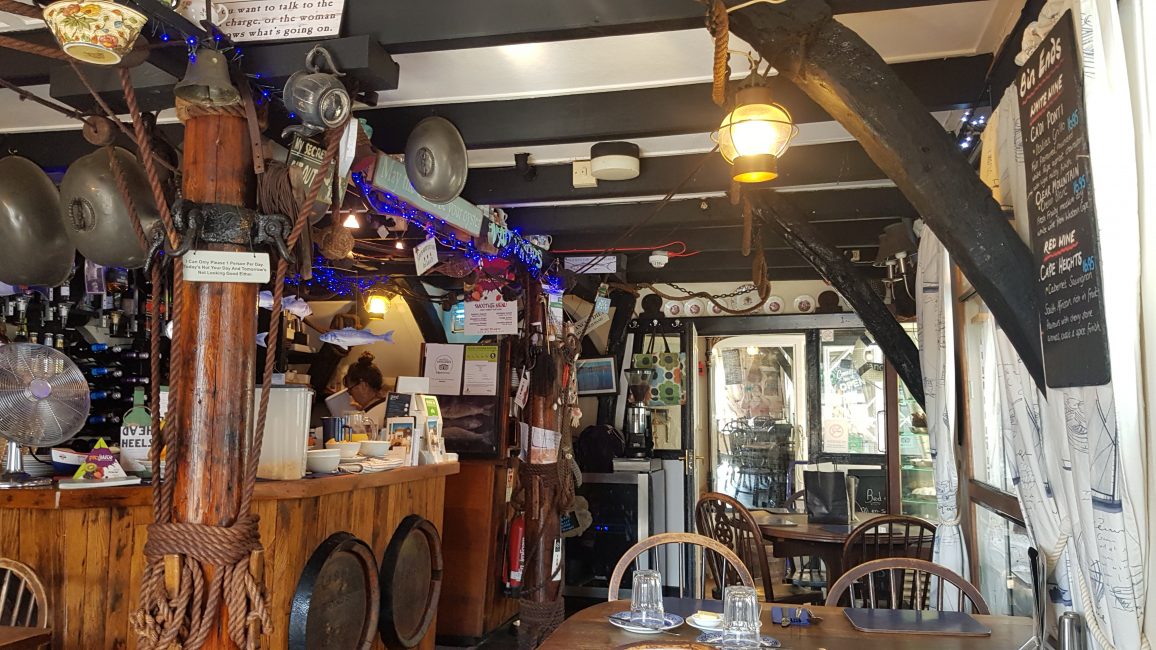 The House on the Props, Polperro

I got myself together and went down for breakfast. I had some little pastries and a poached egg on toast, with homemade walnut bread. I left Polperro at 10am. It was another hot, sunny day, and breezy on the cliff tops.
I climbed out of Polperro, and at the top there was a short diversion around a couple of fields, to avoid slips at Downend Point. There were some lovely views of the patchwork quilt countryside, small fields separated by hedgerows, each a different colour, with little hamlets dotted here and there. 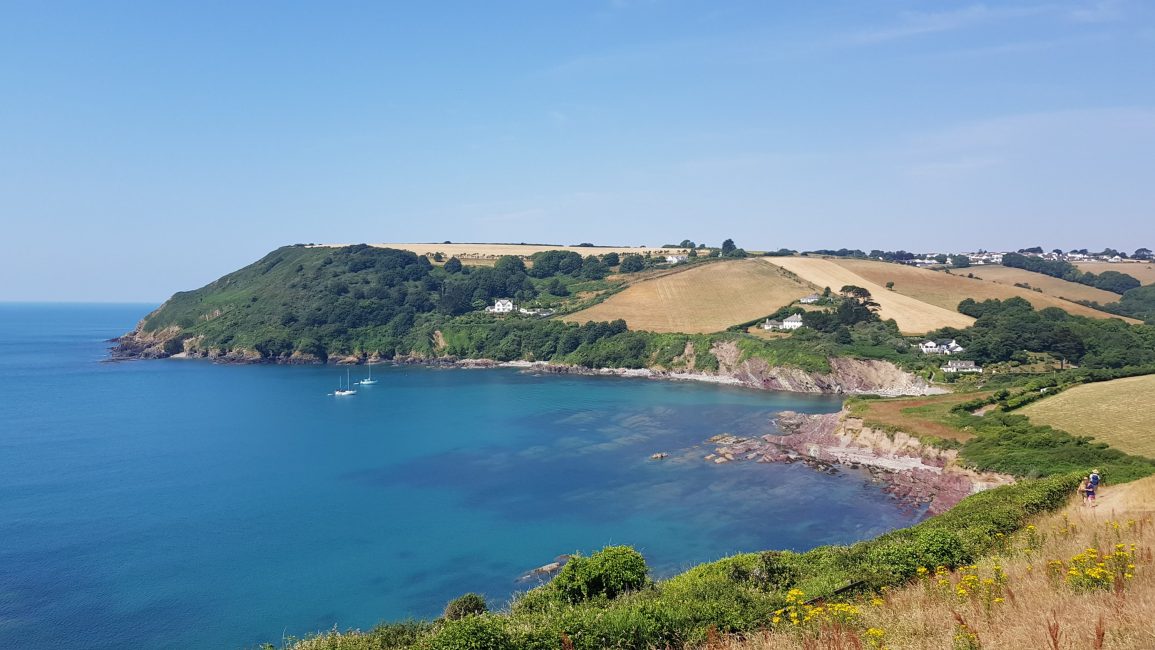 The guide book rated today’s trail as strenuous, but my legs were feeling a lot better for a couple of short days and a good night’s sleep last night, so I was back on form. Soon enough I reached the little beach of Porthallow near the village of Talland. 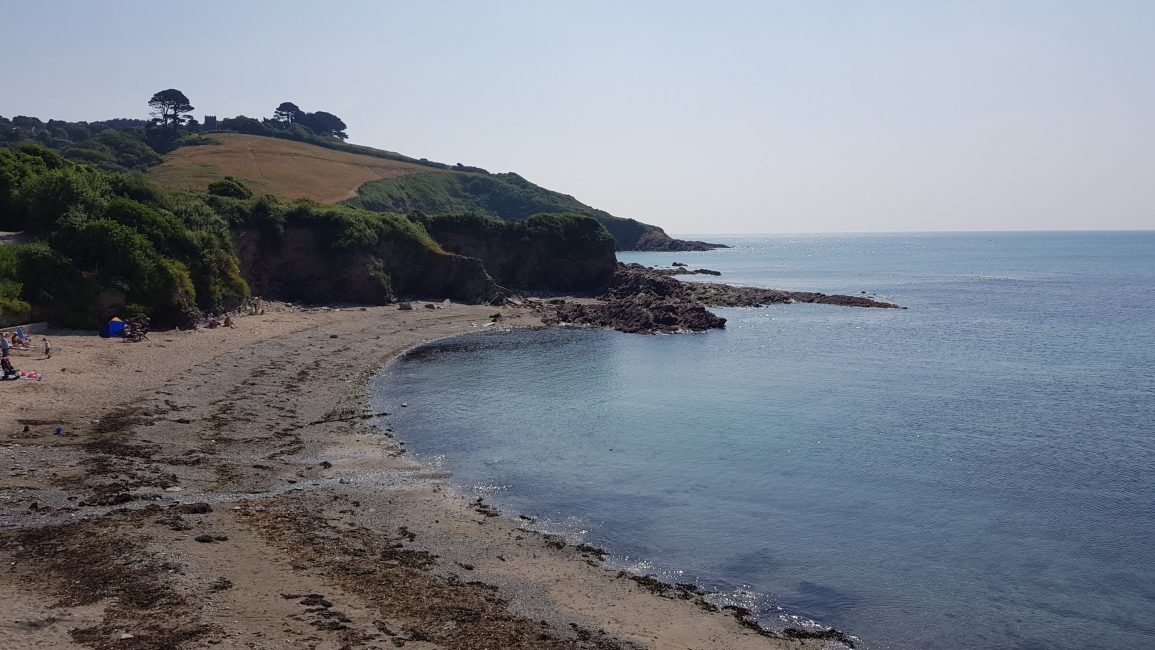 A few ups and downs later and I came around the Hannafore with great views out to St George’s / Looe Island. It was very very hot, so I was glad to be out of the narrow trail and into the breeze. 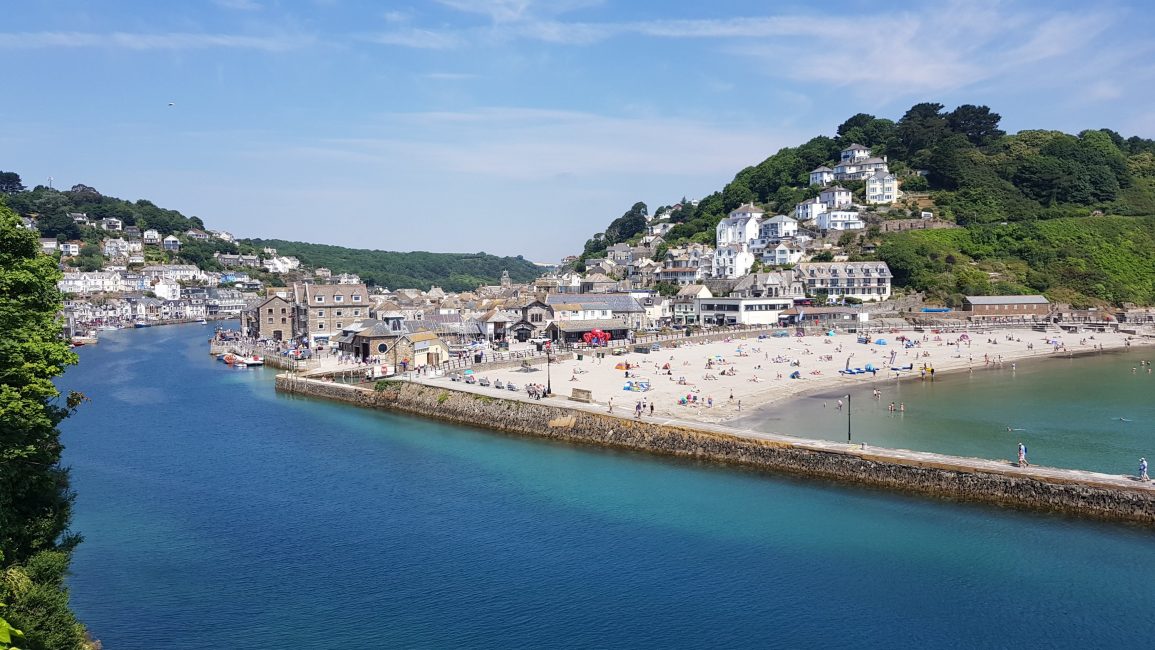 I reached Looe by 11.45am. I was stopped in my tracks by another ridiculously beautiful harbour, and (the formerly separate towns) of West and East Looe, either side of the river.
I slowly wandered around the road and waterfront into West Loo, then crossed the bridge and into East Looe. I stopped into an ice cream shop, who had lots of delicious looking flavours. I asked if I could try a couple of flavours, and the lady barked at me ‘you can have one’… which I thought kind of pointless, so I thanked her and left. I guess she must have lots of people ‘trying’ too many before they buy. 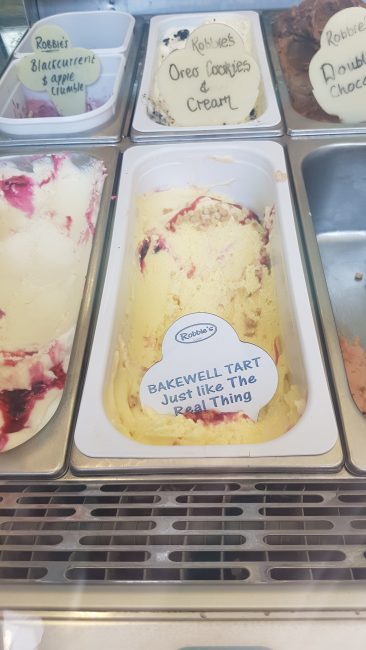 Best ice-cream if the journey at Robbie’s in Looe

A few minutes later I came to Robbie’s ice-cream shop, who let me try a few flavours. After much deliberation I decided upon the bakewell tart flavour, which was the best ice-cream I’ve had on this journey so far, and even had biscuitty pieces in it! I wandered up to the very sheltered East Looe beach, made quick work of my ice-cream and spent some time taking in the views and watching the huge seagulls (horrible giant things) pick through people’s belongings on the beach while they were swimming. 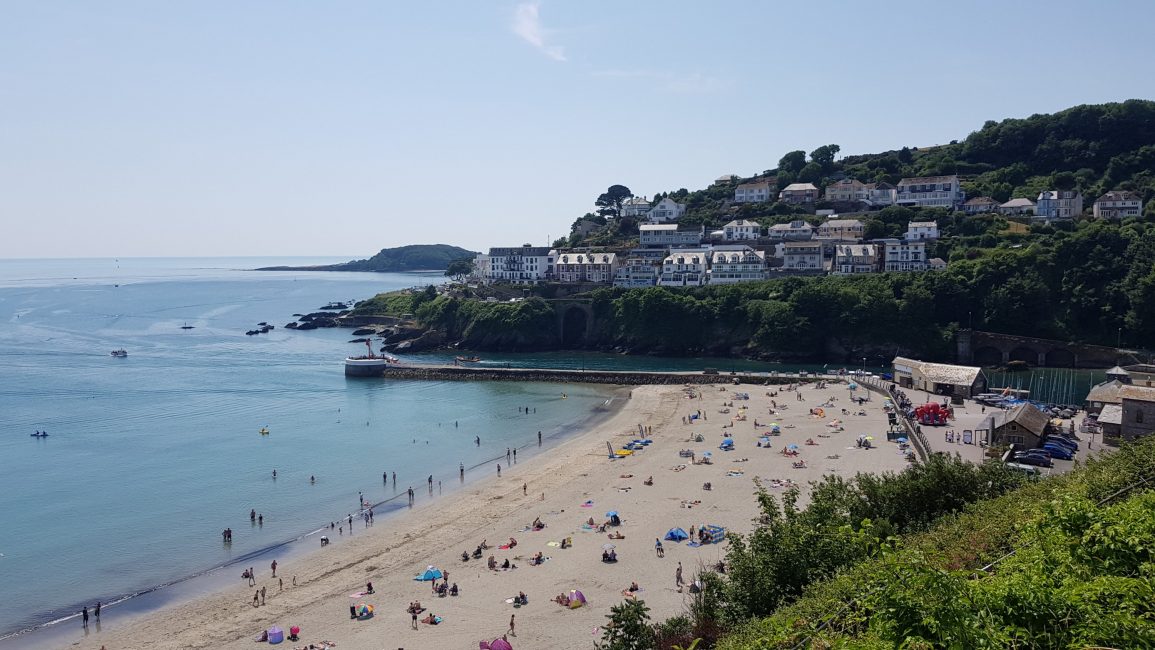 Steve (SWCP on/off hiking buddy) who is now ahead of me, had texted earlier with a great wild camp spot option just after Portwrinkle. I decided I’d head there tonight, and started to make my way out of Looe at 1pm.
Not long later I passed through Millendreath, which had a serious amount of solar powered houses and a nice little beach. As I was walking out of the village I passed Ellie’s wishing pot. I threw in a pound and made my wish… 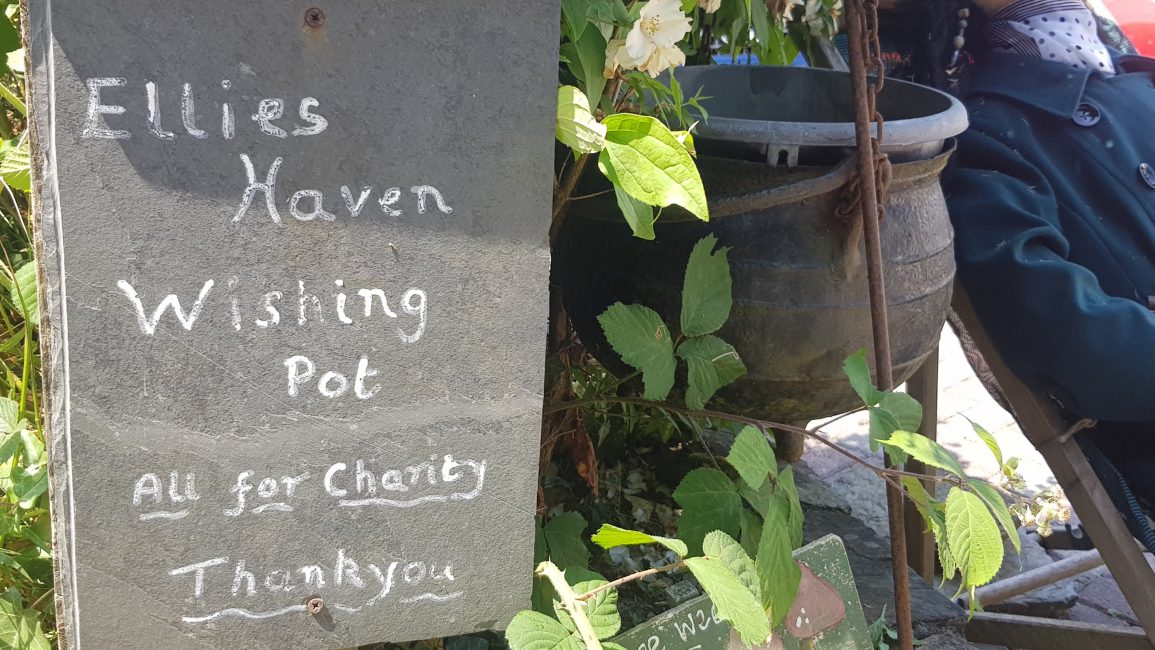 Just outside Millandreth, there was a nice shady wooded section of trail. I disturbed huge bird of prey, which flew up in front of me with it’s kill. I didn’t know what it was, but it was pretty big! 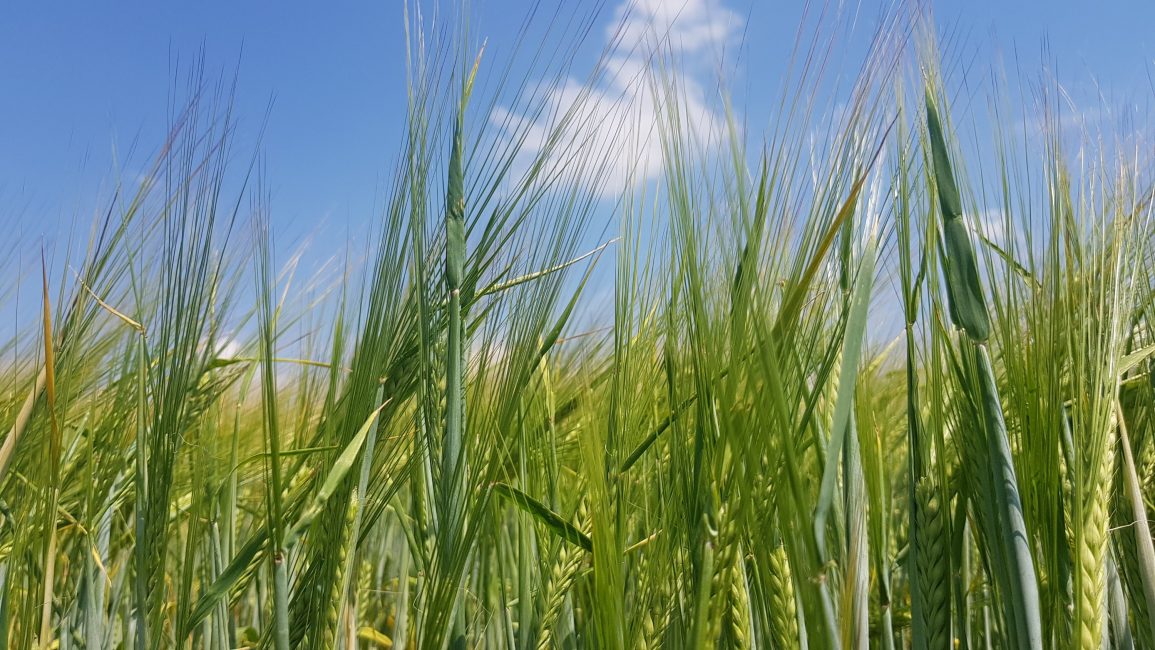 I was enjoying myself so much I missed a turning at Bay View farm (according to my map) and walked along the road until just before before Penhale Farm. The trail was signposted from here, so I wondered if my gpx file is out of date and the path had been rerouted.

When I arrived in Seaton I stopped off at the beach for a museli bar, an apple, and a swim. The water was warmer here, and I stayed in for a while.
After my swim I gathered up my belongings, and walked up to the road to dry my feet off and put my shoes and socks back on. The dark sand was scorching hot, so I had to do an extremely fast walk to the kerb with my pack, which is very difficult!!. It was really really painful, and I hoped I hadn’t suffered any burns! It was a real relief to get my socks and shoes on. The elephant-skin on the soles of my feet suffered no damage. 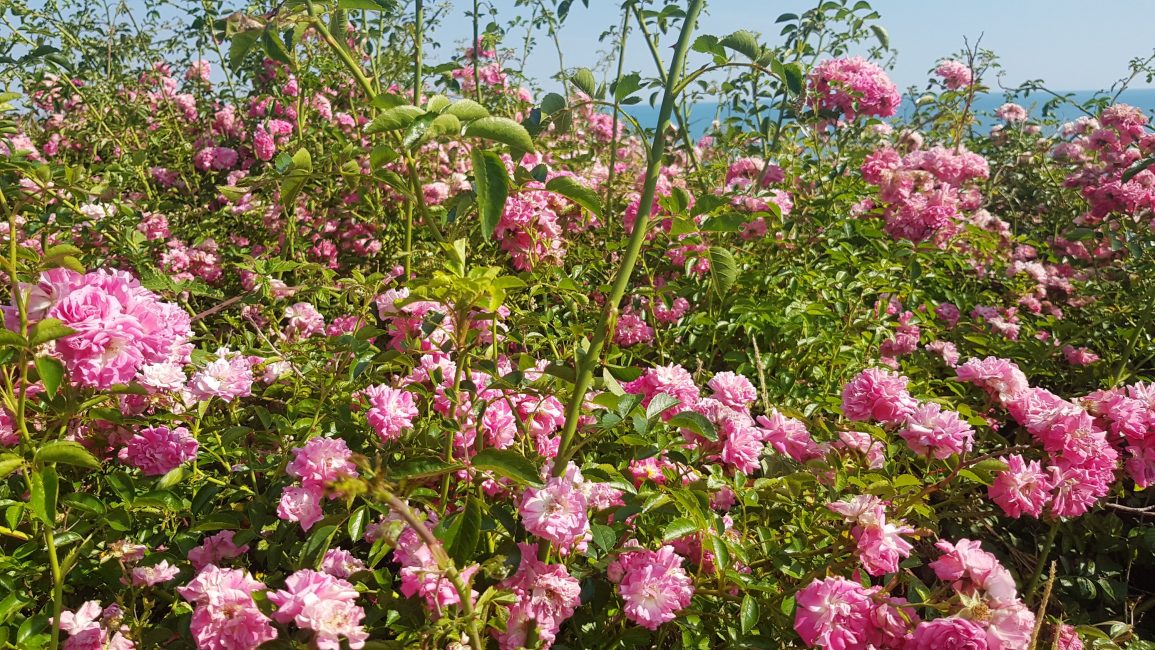 After Seaton, there was a bit of a road walk to the village of Downderry. I stopped to use the loo (this area of Cornwall is well equipped with open, free toilets) and made my way through the village. About an hour later I came up and over The Skerrish. I could see Plymouth in the distance which I’ll get to tomorrow afternoon.
It was ridiculously hot again, even after my swim. My hiking gear was drying off as I walked, and I began to sweat like I never have before on a tramp. Even in New Zealand I didn’t sweat this much! Everything was wet, and I had sweat dripping from almost every part of my body. Needless to say I drank a huge amount of water today.

My final stop was Portwrinkle, at 4.50pm where luckily the café was still open (closed at 5pm). I bought a cold drink and a piece of Victoria sponge for tomorrow’s breakfast, and they refilled my water for me.
I made my way to to the cliff top, and found Steve’s recommend wild camp – a flat piece of ground between the navigational markers, before the military firing range, overlooking Trethill cliffs and long beach. I set up my tent, which was still damp from yesterday morning. A nice breeze blew up and I enjoyed my dinner watching the waves on the beach below. Closer to home there was a flock of minature bumblebees coming and going from a nest in the ground, which I’d almost camped on top of.