Lulworth got a light sprinkle of rain last night, but nothing that’s done anything to break the drought. My tent was a little wet, but was dry by the time I packed it. I woke at 5.15am and had a light breakfast in the lounge of the YHA. There were a few people up already, who were also hiking this weekend, so we got talking over a coffee. The official YHA breakfast began at 7.30 with cereals etc. Then the hot food came at 8am. Many YHA backpackers in the UK offer a dinner and breakfast service. Breakfast was £6.50, which was pretty good.

I left at 8.30. Lulworth is next to huge MOD firing range, which was open by the time I left. Rather than walking all the way back into Lulworth village, I took a path close to the hostel up to the top of Bindon Hill. There were several options here 1) Go down close to Lulworth cove, then around to Mupe Bay and up via the fossilised forest 2) Go over the top of Bindon Hill, skipping Mupe Bay and the huge hill up/out 3) Skip Lulworth village but get to Mupe Bay. I took option 3, to Mupe Bay, which meant that I still got a good view of Lulworth going over the hill, but I still had to walk up the very steep ascent of Bindon Hill from Mupe Bay.

The first hill of the day is always one of the worst, as you’re never wrote earned up enough for it! It was a killer getting up to the Bindon Plantation area above Black Rock cliff, but it was another fabulous sunny morning (extremely hot walking again) and I chatted to a couple of people also on their way up.
At the top, I saw the military buildings behind the cliffs. There was evidence of a recent fire at the top of the cliffs here, with large burned patches of grass, with new green growth just coming through. As I reached the top I saw Steve at bottom of the hill. He’d set off before me but had taken the exact SWCP route through the fossilised forest.

First hill done, and feeling good, as I made the steep descent into Arish Mel. There were great views of Lulworth castle from half way up the next big hill, a two stage climb to Halcombe Vale then Flowers Barrow. At the top, there were amazing view of Warbarrow Bay and Warbarrow Trout yet to come.

I reached Warbarrow Bay at 10.20. It’s a spectacular cove – much nicer than Lulworth, with its white cliffs backdrop and perfect beach. There were already a few people there – you can get to it (on non – firing days) from Tyneham village car park, about a mile away inland.

I made a detour to go and visit Tyneham village. It’s a ‘ghost village’ that was evacuated in 1943, as it was on land requisitioned by the MOD for training troops. It was only supposed to be a temporary measure during WWII, but the MOD placed a compulsory purchase order on the land and the village has remained as-was ever since. Most of the buildings are derelict now, but the church and school have been preserved as museums.

I left at 11am, then walked the mile back to the trail, and set off up the hills of Gold Down. At the top of Gad Cliff, there were excellent views across the grassy downlands to Kimmeridge Bay. After my little break in the village I found a decent pace again, and didn’t find it too hard to get up the cliff.
Coming into Kimmeridge you can see the rock strata in the cliffs and there’s a platform of harder rock on the sea bed which is visible for a long way beneath the turquoise waters.

I reached Kimmeridge bay at around midday. Just before the car park is a tiny ‘nodding donkey’ oil well. This coastal area is a marine reserve, and there were lots of families rock-pooling and divers coming and going. I caught up with Steve here and had a quick break for museli bar and piece of cheese. There is an excellent Wild Seas information centre at Kimmeridge, and there are toilets, but no cafe. The last in the centre told us that sometimes there’s an ice-cream van in the car park, but it hadn’t got there by the time we did.

I left Kimmeridge and headed to Clavell Tower at 12.15pm.
Continuing up the cliffs, there were huge cracks and fissures on the trail from lack of rain, and the wild grasses were tinder dry too. After the tower, there was a let-up in the hills for a couple of Kms, which meant I could get some decent mileage under my belt.

The next major hill was West Hill, which was another whopper. From there it was on to Chapman’s cove, which was beautiful, with several yachts and motor boats in anchored in the cove. I could see St Alban’s Head in distance, but didn’t reach out for a while because the path went inland for a few Kms, then out to the headland, which included another monumental down and up steps. On At Alban’s Head, Steve and I popped into the Coast Watch office to get water as I’d run out.

From here it was several more Kms of undulating trail to Windspit cove. This is a quarried area, with flat ledges for sunbathing and swimming from. It was really busy with holiday-makers. It was yet another couple of Kms on to Dancing Ledge, which was also really busy. Dancing ledger has been quarried in such a way that there’s a seawater pool on one of the ledges. It was beautiful, but again super busy, and Steve and I were really hot, sweaty and tired. We had to walk uphill for another 1.5 miles to get to the campsite.

We took a pitch at the campsite near Acton village. There was no reception or office, or anyone looking after it, so we pitched up at around 5.30pm. We got the tents up then walked 5 mins down the road to the shop at Tom’s campsite, which was far less crowded (we wished we’d pitched here – they have a hiker field, but we were to tired to move sites). We bought loads of goodies including off course ginger beer and ice-creams, which we ate immediately. We went back to camp, and showered (20ps required). I cooked and ate dinner and planned transport for getting to the Isle of Wight for the additional little trail I’m doing straight after this one. It’s 70 miles around the IOW so that makes my trip an even 700 miles.
We had been thinking about going to the local pub in Worth Matravers, a few Kms away, called The Square and Compass. It came highly recommended by lots of people, plus they had a band on. But I was so tired I went to bed straight after eating. I had a fantastic penultimate day on the trail. It was another entirely unexpected favourite section of mine. This Jurassic coast section and the World Heritage site, has been really special. What a great way to end the hike! 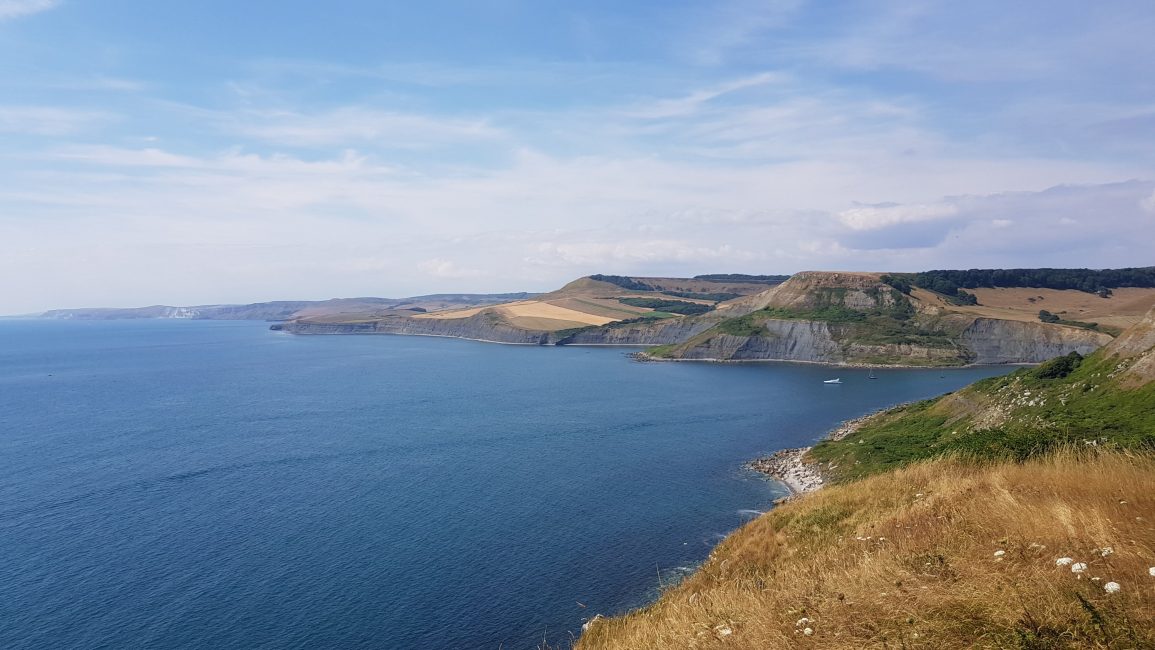