I was up early, even for me today, and enjoyed my breakfast at 5am with a gorgeous sunrise. I said goodbye to Steve and left camp at 6.40. As I walked the couple of Kms back to the coast path, the sun was catching the Eastern end of the Isle of Wight beautifully. It was another fab morning on trail! As I walked back down to Dancing Ledge a couple were sleeping in each others arms on a mattress on the cliff top… aww. A few people had slept out on Dancing Ledge too.

Today’s path was more narrow, overgrown, rugged and undulating than of late, and I reached Anvil Point lighthouse at 8am. The sun was beating down again and it was already hot, and was soaked with sweat already. At the Tilly Whim Caves, where caves have been quarried into the cliffs, I noticed that there had been a large collapse.
After Anvil Point, there was a short stretch around to Durlston Head. The castle wasn’t open this early, but I did take the time to stop at the stone globe. It is one of the largest solid stone spheres in the world, with a 3m (10ft) diameter. It is made of Purbeck stone and weighs 40 tons. It was pretty impressive! 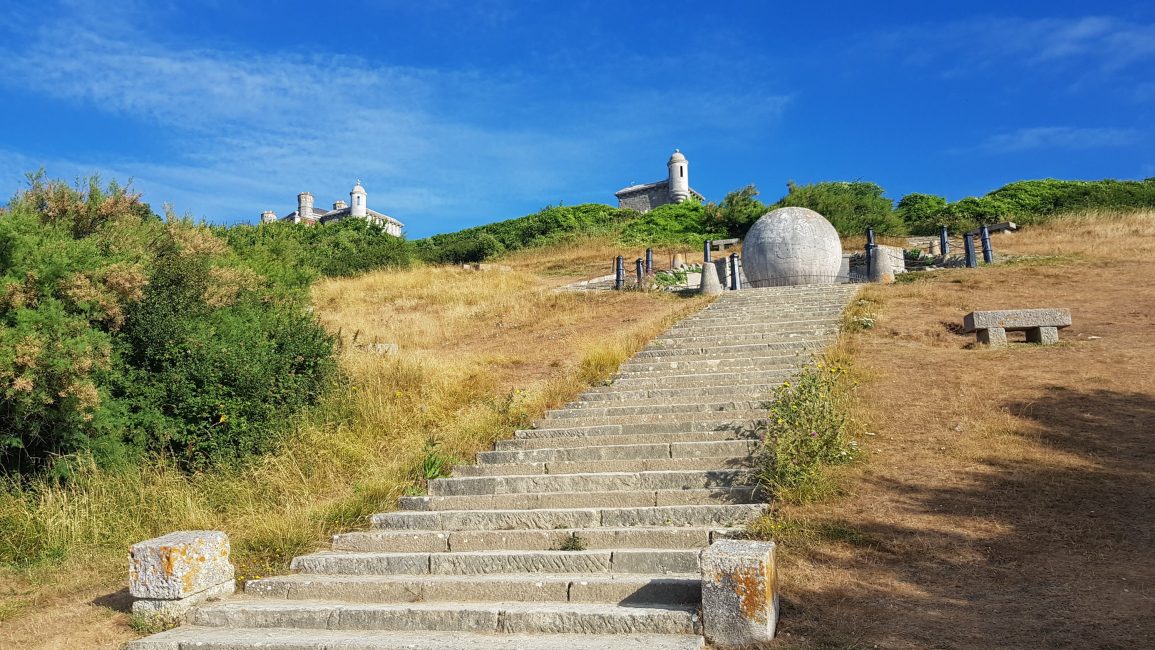 At Durlston Point I got a first glimpse of Peveril Point, and the Old Harry Rocks chalk stacks and Poole harbour – my finish line.
The trail led up to the Castle and the path became wide and shaded. Hikers are given the choice to get to Swanage via the path with the steps or not… I went with the steps, which wasn’t too bad at all. I reached Peveril Point at 8.45am, which had great view of Swanage across to the Old Harry Rocks. There was a perculiar current of water flowing over the breakwater here which I watched four a while, and from Swanage harbour. Fishing trawlers were going out to sea.

I followed the trail close to a the sea into Swanage, and ordered a breakfast bap in a cafe at the harbour which took about 30 mins to arrive. But the harbour was full swing, so it was time well spent people watching.
I was through and out the other side of Swanage by 10.15am. I have been to Swanage before a few times, and it’s a lovely little town, and is definitely worth a wander off you haven’t visited before. The beach was packed with families on this hot Sunday morning.

By 10.45 I had reached the Old Harry Rocks, chalk rock arches and stacks just off the headland at the entrance to Poole harbour. It was quite busy with tourists, and well worth the walk.

I could see my finish line from here and was keen to get going.
I got to Studland Bay at 11.40am, and walked the full length of the beach. Thankfully the tide was on its way out, so the sand by the water’s edge was compact and it was an easy walk.

Half the beach here, for a Km or so, is a popular nudist beach. Never before have I seen so many naked dangly bits in one place. Generally speaking the average demographic was over 60 and male, although there were a few older couples. I only spotted one younger family.
And with that, I was finished!! It was 12.30pm when I touched the sign post at South Haven Point by the Sandbanks Ferry – the day didn’t take as long as I’d thought it would. I asked the only other foot passenger waiting for the ferry, if she could take my photo. She took lots but unfortunately none of them actually got all of the sign in.. oh well.

It was a rather underwhelming finish really, but I was pleased to have competed 1013kms (630 miles) in 43 days, including just a couple of zero days and a few half days. This has been a completely different experience to Te Araroa NZ. It has been wonderful, and the (mostly) great quality of the trail itself has made it pretty easy walking in comparison, despite the heat, the hills and the sweat! Every hike is different, so I can’t really ‘compare’ it to TA. That said, I am a beach girl and I love being by the coast. It makes me feel settled to have the waves as my constant companion. I was lucky again with my gear and my health – having no major breakages and no injuries.
The South West Coast Path is the UK’s longest national trail, and I would absolutely recommend it to anyone thinking of giving long distance hiking a go. I will post some more tips, my gear list and daily schedule over the next few days 🙂