On this awesome Tableland circuit in the Kahurangi National Park, we started from half way along the Cobb Reservoir taking in Asbestos Cottage, Salisbury Lodge, Balloon hut and Lake Peel.

It was great to fill in a few gaps in my Tableland tracks. The last time we came, we walked another weekend loop via Mt Arthur hut, Gordons Pyramid, Balloon and Flora. Also, check out my other walks up Mt Peel and a fantastic three days over the Lockett Range and Mt Cobb tops.

Our timings on this Tableland circuit were:

Getting There Tableland Circuit

The Cobb Valley is about a 3-hour drive west of Nelson. From Nelson head to Motueka on the SH60 then after coming off Takaka hill turn left into the Cobb Dam Road heading for the Power Station. The road becomes one lane after a few kilometres, with the Takaka river below and cliffs looming above. There are plenty of blind corners and few passing spots. After the power station, the road is unsealed and heads up to the Cobb ridge where there is a car park, toilet, excellent information board and amazing views of the reservoir. We continued on down and parked about half way along the reservoir.

To the Upper Takaka River via Bullock Track

We got going from the car park mid way along the reservoir at around 9.35 am. The rocky track began through a tall, swaying forest of manuka with a climb of around 150m. We reached the junction with the Cobb ridge track at Peat Valley within about 20 minutes and continued straight on across to the Bullock Track. Being winter, it was a little wet underfoot, but nothing serious. The track was well marked and easy to follow.

After the short open tussock section, we were into a beautiful beech forest for a very pleasant couple of kilometres before dropping around 340m, almost to the Takaka River. We reached the junction to the Asbestos Cottage at 11 am.

The walk to Asbestos Cottage was an easy hour of gentle uphill through the forest before popping out into a mineral zone for some great views of the area. Bullock Creek was small but unbridged, so one of us took our shoes off to cross, the other rock-hopped.

The open section about half way to Asbestos Cottage provided some excellent views of the Takaka Valley to Barron Flat and across the Arthur range beyond. We stopped to have a look at some rocks along the track, gave one a bit of a scrape with a pole tip, and from the way it flaked off in little fibres, assumed we’d just found a tiny pocket of asbestos, which was discovered in the area in the late 1800s and mined until the site closed in the 1960’s.

Ray Salisbury’s beautiful Tableland book describes the asbestos works and includes photos from local museum collections from the 1940s, overlooking the asbestos quarry, as below. 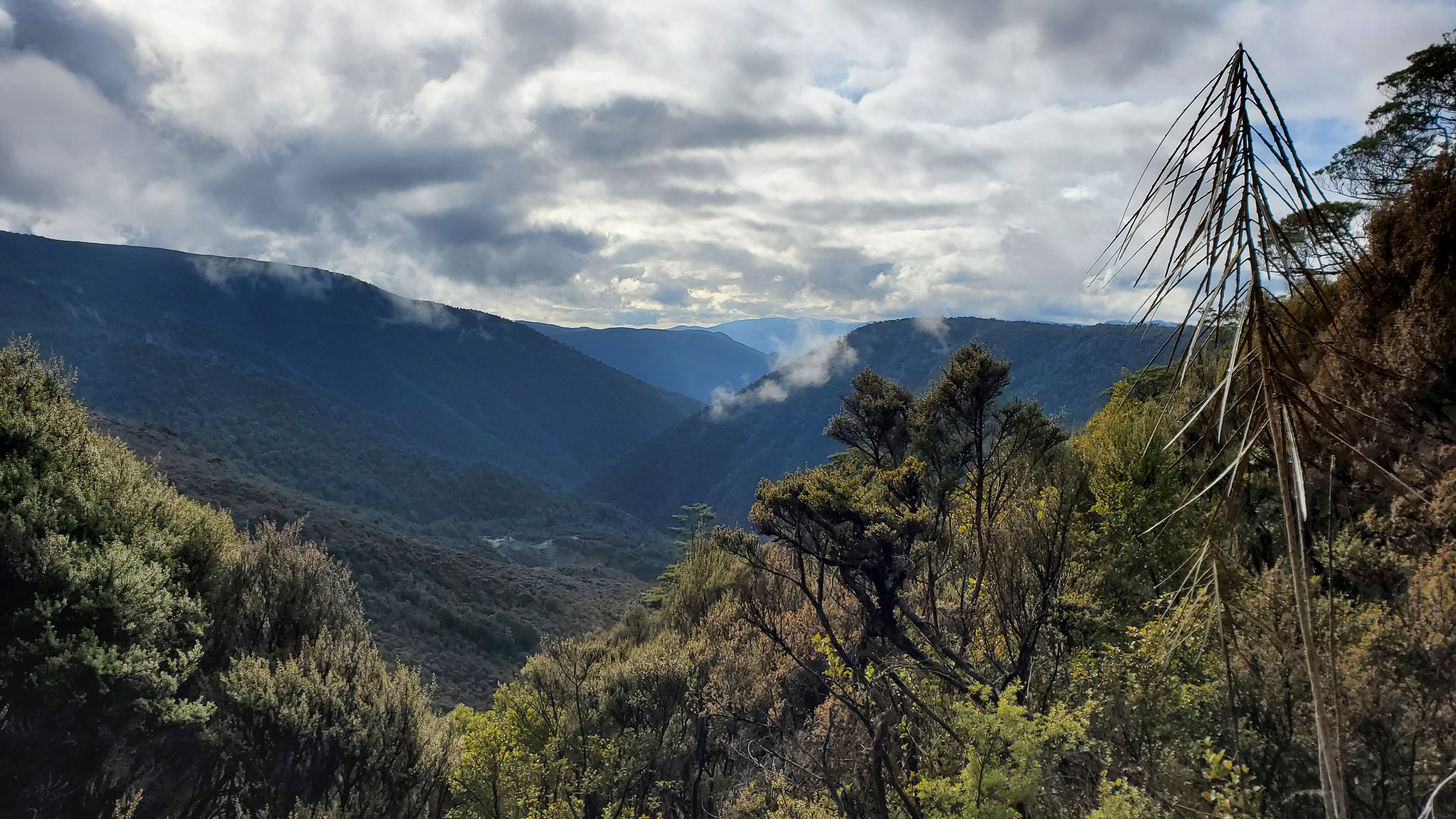 We reached a small clearing and the historic Asbestos Cottage at around midday. Built in 1897 by prospecting miners, its walls and artifacts tell the story of Henry Chaffey and Annie Fox who lived here largely in isolation for about 40 years from 1914. We had read in the Tablelands book that the couple preferred visitors announce their arrival with a warning call – which we duly actioned before heading up.

I was a little sad that we weren’t staying here tonight. This wonderful 4 bed hut with a fire at one end and the sleeping quarters at the other, had a real feeling of the past about it. We looked around, then ate our lunch and lazed for a while in the sun on the grass.

After a very leisurely lunch, we headed back down the Asbestos track towards the Bullock Track junction. Within an hour we were crossing the swingbridge over the Takaka River.

The Takaka Track was a nice, easy and gentle uphill to the junction with Flora stream, which we reached an hour later at 3 pm. We took a ten-minute break at the Growler Rock Shelter before continuing along the Salisbury Track to the Dry Rock Shelter close to Salisbury Lodge.

Even though it was mid-winter, I had been keen to sleep at the Dry Rock Shelter. We filled up our overnight water bottles from the creek at the bridge then turned left, up to the shelter. As we remembered from last time, the track up to the shelter was pretty boggy, but it was only a short section.

When we got to the shelter it was, disappointingly, a bit too drippy to sleep there. Water was seeping from the rock onto the bed platform and we didn’t fancy damp sleeping bags. As it happens it was a great decision because later on, a dense fog came rolling in which wouldn’t have been ideal.

We made the call and hurried on to the palatial 22 bunk Salisbury Lodge, which we had all to ourselves. As it was only 5 pm we had a little time before dark, and it was nice to get a small fire going to warm things up a bit while we did the usual hut chores – a bit of tidying and some firewood collection for the hearth.

We woke before dawn and were treated to a fabulous skyline of misty pinks and blues as the sun rose. There was no need to hurry, so we enjoyed a long breakfast and watched everything come to life.

After a final sweep, we left Salisbury Lodge at 8.45 am heading towards Balloon hut. It was a glorious morning and we kept turning around to watch the clouds rise and fall across the tops of the Arthur Range behind us.

The track weaved its way in and out of forest and tussock as it gradually climbed to Balloon hut. Some parts of the track were still frozen, but we were drenched from the waist down from the dew on the long tussock and I was glad I hadn’t worn my long johns under my shorts.

This great DOC brochure includes a little about the geology and history of the area. This time we bypassed Bishops Cave near Cundy Creek and instead headed off into the bush to look at some other cool rock formations close to Balloon hut. We reached the hut at 10.15 am. Again, no one was around and a quick check in the hut book told us that only one person had stayed last night. We took a five-minute break in the sun and continued on.

The section from Balloon hut to Lake Peel gives some of the best views of the Tableland area (at least in my opinion.. it’s my favourite section). The track follows a gently sloping ridge between Deep Creek to the east and Tarn Creek to the west with expansive views in every direction.

As we passed, we looked over at the plateau above Tarn Creek and loosely planned an adventure there for another weekend. It was beautiful. We noticed the cloud was rolling in from the west so hurried things up a little when we met the track at the base of the Peel range.

Just over an hour after leaving Balloon hut, we arrived at Lake Peel at 11.30 am. This beautiful lake in a hanging valley at the top of Deep Creek is also pretty special and we enjoyed a little rock hopping at the base of the Peel range. The track was waterlogged closer to the lake, but nothing too serious.

We continued around the valley crossing the small stream leading down to Deep Creek and headed up to the ridge on the northern side of the creek. There was an occasional small slip and some eroded sections, but it was mostly an easy climb.

Upon reaching the junction with the Lake Peel Track (leading down to Myttons hut) we turned east, along the Cobb ridge. We walked on for about a kilometer or so before we found the most perfect view for lunch.

After lunch, we made a slight deviation to check out the other side of Deep Creek, and were lucky enough to see a deer in the distance. Once back on track we skirted the forest through waist-high tussock before entering the forest to descend into Peat Valley. On the way down we got some great views across the reservoir to Iron Hill and Sylvester.

The lower part of the track was pretty muddy as we got down into the manuka forest again, but we enjoyed the variety of the track and the easy downhill. We reached the Peat Valley junction at 2 pm, and fifteen minutes later were back down at the car park.

It was another excellent weekend exploring the Tableland area and the best part, as always, is that we’ve lined up another couple of trips for future weekends.