The last time I stepped foot on the Tama Lakes walk, was in 30 degree January heat on the ‘Tussock’s Traverse’ trail run a couple of years ago. This time, thankfully, I was walking the beautiful 17km loop on a glorious, clear spring day. This made the experience very much more pleasant. The walk is one of many you can do around Whakapapa Village in New Zealand’s volcanic Central North Island. It is an offshoot of the Taranaki Falls loop walk, which starts at Ngauruhoe Place, just above the Chateau Tongariro and before the Visitor Centre. Doc recommends 5-6 hours for the entire walk, and it took me nearly 5 hours with plenty of photo stops and a rest at the upper lake.

The walk to Tama Lakes in my humble opinion, almost rivals the Tongariro Alpine Crossing for great views, but the walk itself is much easier, as it’s between the mountains not over one. Starting from Ngauruhoe Place, I walked up to the end of the road to the start of the trail. The wide gravel track led me through mostly open tussock and alpine scenery, with the exception of a nice forest at the beginning and end.

Bearing in mind it hadn’t rained for a few days, most of the track was in good condition with only a few washed out sections. I would imagine it can be pretty slippery after rain. There were a couple of little river crossings, but nothing that actually got my feet wet. The track is undulating rather than hilly, until you get to the lakes themselves.

Almost immediately I was hit with marvellous views of Mounts Ruapehu and Ngauruhoe. Around every corner there is another photo opportunity, another angle, another little bridge to cross – I could even see the ski fields on Ruapehu. On this Spring day, the colours of the grasses and foliage were shimmering with a variety of colour in the sunlight.

After about 30 minutes, I reached a junction where the Taranaki Falls walk turned off down to the left. I continued on to the Tama Lakes. There was one other junction before the lakes, and this time I kept left for the lakes, as the main track continued right to Waihohonu hut.

I can’t remember the point at which the wind got up, but I had started off wearing just a merino tshirt, but by the time I got to the lakes I had donned my jumper, jacket, Buff and gloves! This area between the mountains is like a wind tunnel, so if you’re thinking of doing it remember to bring your layers!

I reached the Lower lake at 11am. The Tama Lakes are old volcanic explosion craters, and there is a little information board for your reading pleasure. The views over the lake were spectacular.

Lower Lake sits at an elevation of 1240m. From there the walk to the upper lake at 1440m is pretty steep and unformed. Poled markers guided the route up and over a more stable ridge to a point overlooking the upper lake to the North and lower lake to the South. To the South West I could see all the way over to Mount Taranaki.

It really is worth making the effort to reach the upper lake. I have been over the Tongariro crossing numerous times; but this was the first time I’d seen the Southern side of Ngauruhoe so close up. It was amazing to have the whole place to myself – what a treat!! I took a rest, ate a sandwich, and marveled at the views. It’s possible to get down to the lakes if you wanted to, but it isn’t marked, and it would be pretty steep.

Back via Taranaki Falls Walk

I made my way back down just as a few groups of European travelers were coming up. We had a quick natter and afterwards I hurried to get down out of the wind. On the way back, I turned off to the right to follow the Taranaki Falls loop walk. This heads  back to the Tongariro Chateau. The steps led down to the beautiful 20m waterfall, then over a pretty bridge to another little waterfall. Then it enters the beech forest.

The track stayed close to the river making for some nice paddling opportunities in the summer time. The path led back up away from the river towards Whakapapa village. I took a right-hand fork and ended up on the lawn of the Tongariro Chateau. 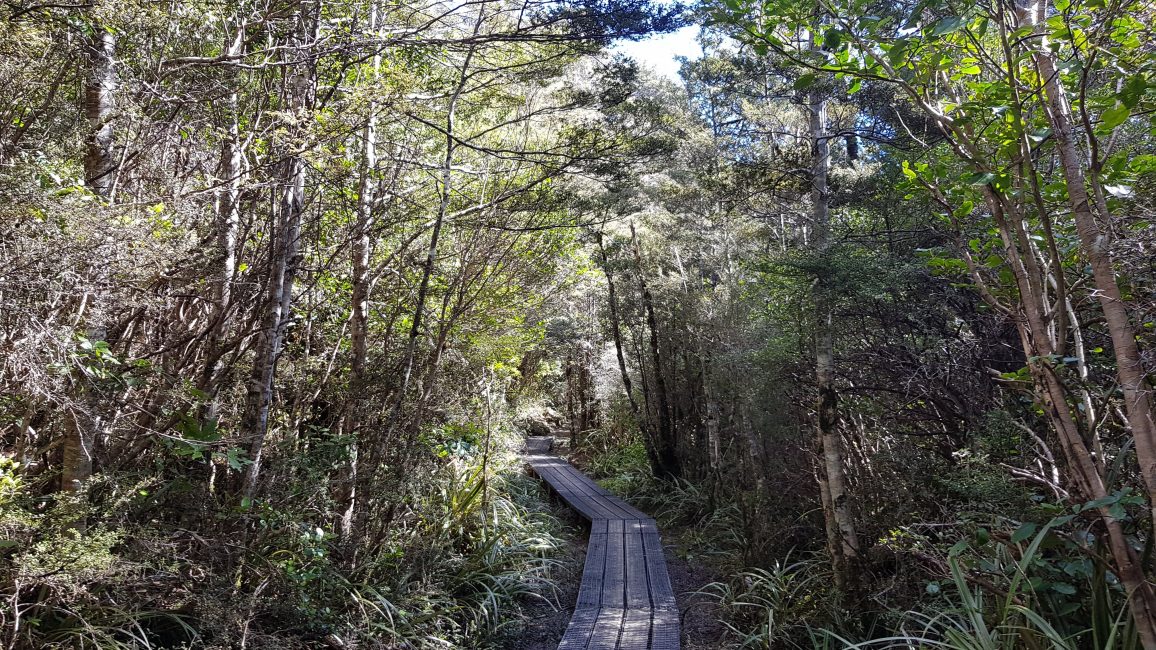 I couldn’t justify it on this occasion, but a lovely end to the day would be to pop into the Chateau for their high tea. If you’re feeling a bit fancy get the one with bubbles 🙂 . Being in the Chateau is like stepping back in time. The high tea is taken in their Ruapehu lounge with the most incredible views across to Mount Ngauruhoe. There’s always next time…

For more information on the Tama Lakes, and other walks, see the DOC brochure on the Whakapapa Village Walking Tracks.