We woke with the light after cyclone Gita rest day and had a quiet breakfast. We left the hut at 7.30am heading towards Kiwi hut. We were really pleased to see that it was a shaping up to be a lovely fine day!! The trail started down the river valley, through bush, and then flattened out onto river terraces. There were lots of river crossings from the start, and the boys helped me across a couple. We were amazed to see snow on some of the mountains around us.

We took a short break at Kiwi hut at 9.30am and left again at 9.50am. Immediately after Kiwi hut we had to cross the Otehake river which was pretty wide. The water was running clear, but it was pretty high and swift. It was braided into a number of sections and we crossed the first ones thinking we were over, then we crossed over a large couple of boulder banks there were another two – the final one being problematic.

We spent an hour looking for a place to cross. After a couple of attempts we finally picked a spot upstream and crossed, but this meant we had to bush bash for 30 mins back down again.

Once back on track there were very few markers. We followed the true left of the Taramakau river and eventually found some again after we crossed Pfeiffer creek. We stopped for lunch at 1pm, then hung a left turn into into the Otira river valley.

We took the flood track as the Otira river was up. The track sidled along a reasonably steep face in the beech forest, with lots of ups and downs and a decent amount of fallen trees. We were glad when we could pop out into the river valley itself and walk along the rocks to take a shortcut for the final couple of kms. 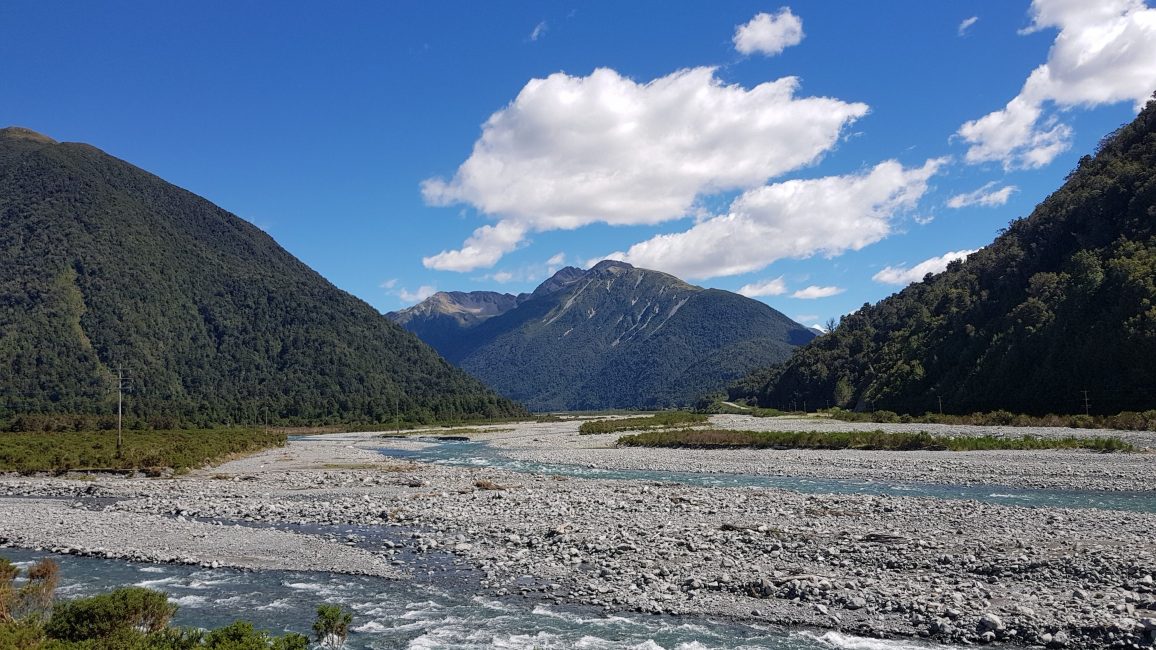 We got to Morrison’s footbridge at 3.30pm and tried to get a hitch into Arthur’s pass. It was fruitless, and we were still there at 5.30pm.

Just as we were contemplating a cold night camping by the river, we saw a lone figure walking towards us. It was Bill from ‘The Sanctuary’ accommodation, who had been out maintaining Te Araroa trail (we missed him when we took a short cut by the river bank). We piled into his van and we drove the spectacularly scenic 25kms to Arthur’s Pass.

At The Sanctuary I took a beautiful little pod made out of an old water tank.. with a huge window cut out of it – with a lovely bed inside! Phil went down to Bealey as he’d got his resupply box sent there, and Mike set up his tent. There were lots of Te Araroa hikers there who had been waiting out the storms in various locations around us.

There were also lots of Kea (large alpine parrots) hopping around the place. Mike and I went to dinner and enjoyed magnificent if pricey fish and chips plus a huge dessert and a hot chocolate!