Mount Owen is the highest point in the Kahurangi National Park, standing at 1875m and overlooking a beautiful, glaciated, limestone karst landscape. There are several ways to walk to Mount Owen. Yesterday I took the easiest and most popular track from the Courthouse Flat DoC campsite up to Granity Pass hut, to the tarns past Sentinel Hill. DoC recommend 6 hours to walk the 8.3Kms to Granity Pass hut, and I made it in nearly 4 hours. It took another leisurely hour or so to walk to the tarns.

It was a very cold Autumn night at the base of Mount Owen. I camped just above the tarns at 1500m, about an hour up from Granity Pass hut. It was dark by 6.30 pm so I read for a little while then went to bed around 7.30 pm.

This was the first time I had slept on my Thermarest sleeping pad since I repaired a leak on it a couple of months ago. It held up like new! The night was absolutely still, without a sound or even a breeze. I turned over approximately every half an hour. When I woke properly in the night around 2.30 pm there was a glorious full moon, no cloud cover and the tent was completely frozen. I wore all my clothes, hat and gloves to bed and thought I really must treat myself to a winter sleeping bag. I use a 3 season Katabatic Gear Palisades quilt, which for me as a cold sleeper, didn’t quite cut it in these temperatures.

When I woke at 7 am there was a gentle breeze, and the tent was completely dry. It was a beautiful clear day. I enjoyed my Apricot OSM bar with a coffee and left at 8 am.

Mount Owen is famous for its incredible limestone rock formations and crevasses. Underneath it all is the largest cave system in New Zealand. The route up the mountain is officially an unmarked track, but there is a narrow worn track to follow most of the way, and it is marked by cairns over the rock formations. It was very easy to follow on this gloriously sunny morning, but it wouldn’t be a good idea to come up here in poor weather or with little visibility. You could easily lose the way and end up in the maze of crevasses and rock flutings.

Once you hit the rock formations on Mount Owen you’re straight into the hopping and scrambling. As anyone who has hiked with me will confirm, I don’t have the best head for heights! Today was no different. I knew my legs were strong and I could hop across that small first crevasse (just a small jump) but the fear of falling was overwhelming. It took a little sit-down and stern talking-to with myself to control my shaking legs. After that first step I was completely fine. However this was one day when I made sure I was carrying my PLB in my shorts pocket (…I know I should carry my PLB on my person all the time – but usually mine’s in a hip belt pocket or outside pocket of my pack).

Up to the summit

After the initial scary-moment, I really enjoyed looking for the cairns in the maze and finding the way. As I was almost at the top, an inquisitive goat watched my from a perch high above me.

I passed a sheltered, but tiny flat spot, just big enough for a tent, and thought how wonderful it would be to camp up here overnight. You’d have to bring enough water as there’s none upwards of the tarns.

On the summit of Mount Owen

From the summit, the views are absolutely incredible! I could see North to Tasman Bay – blanketed in cloud this morning, and South to the snow-tipped Southern Alps. It was breathtaking. 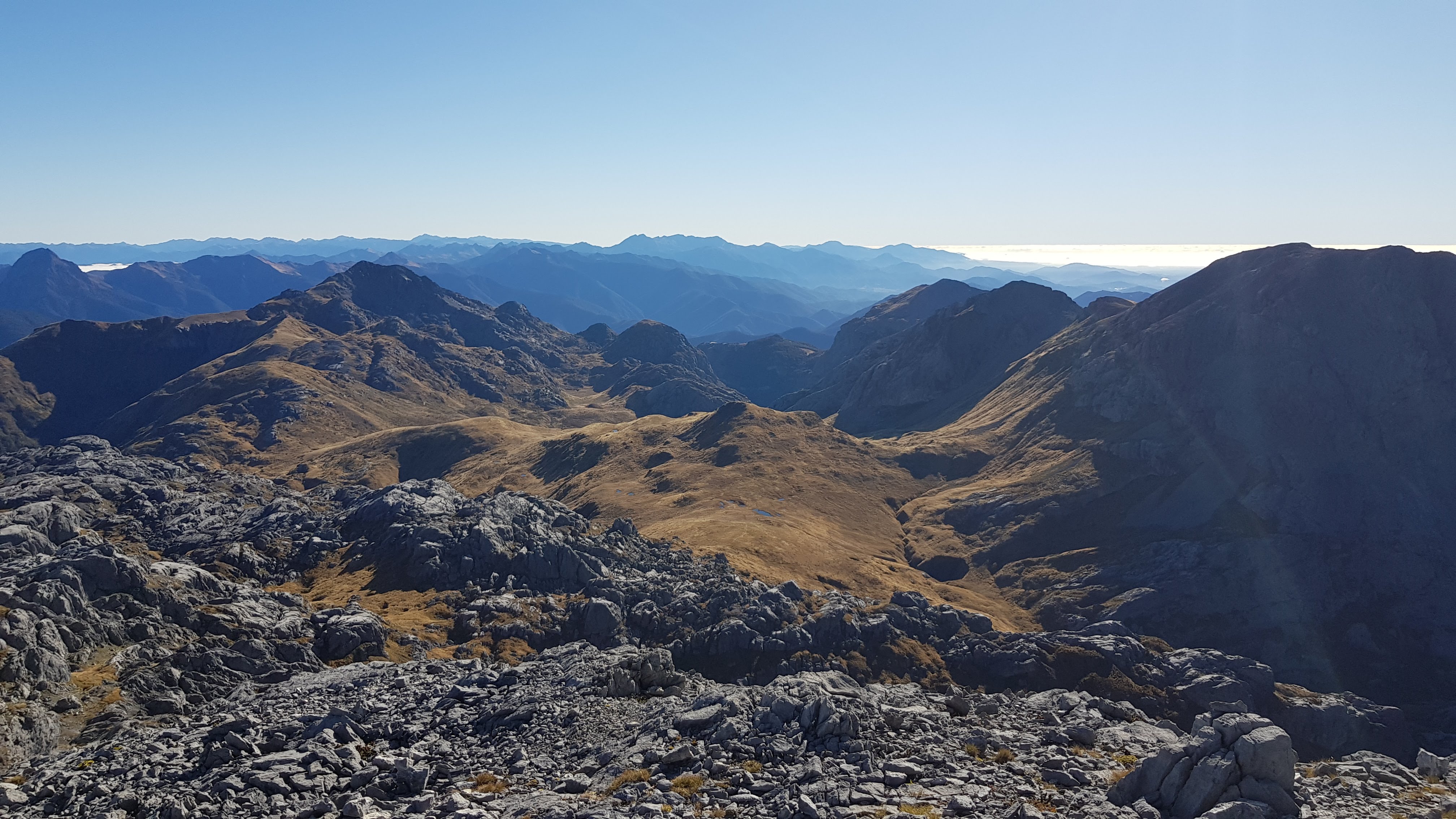 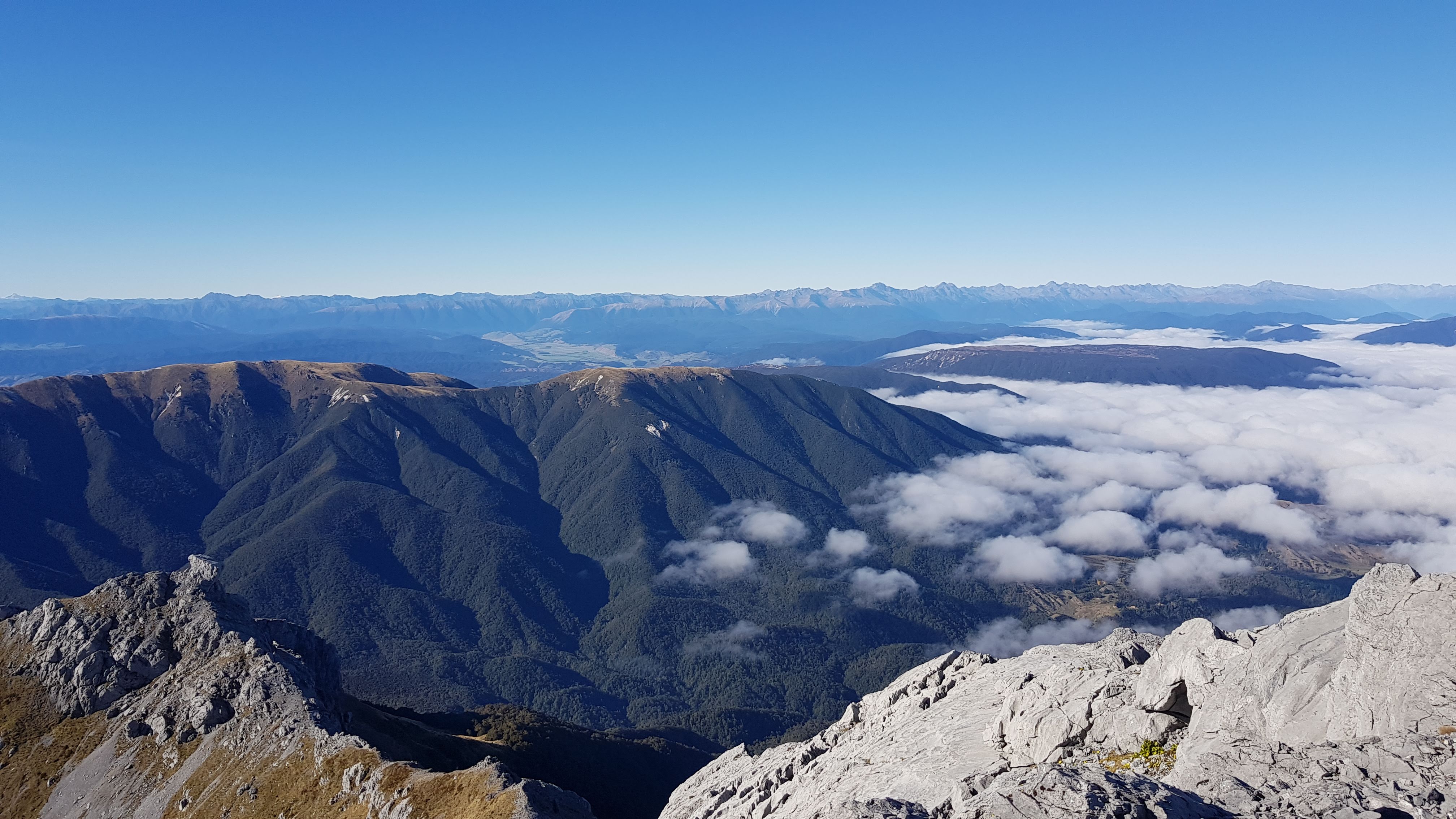 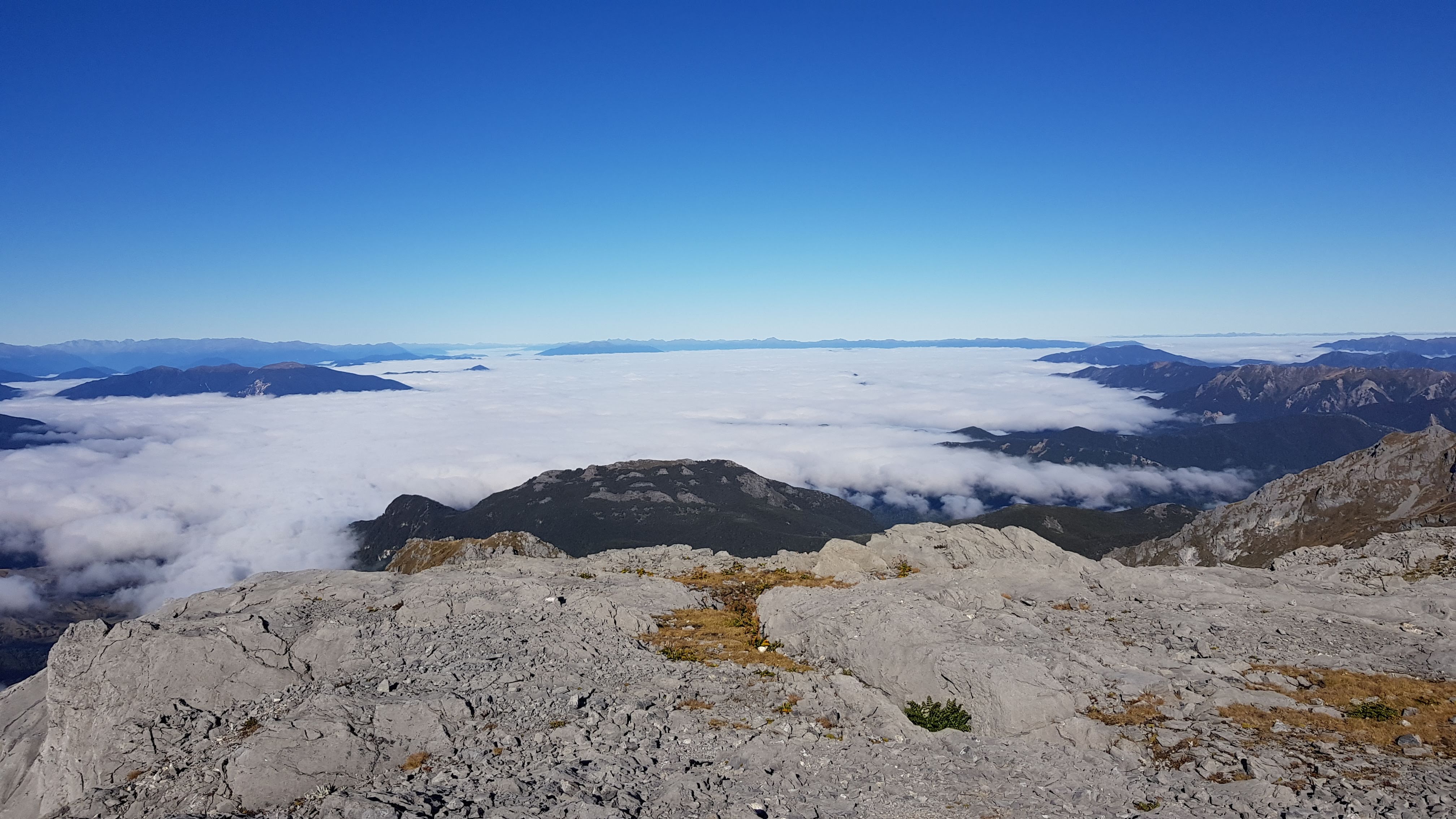 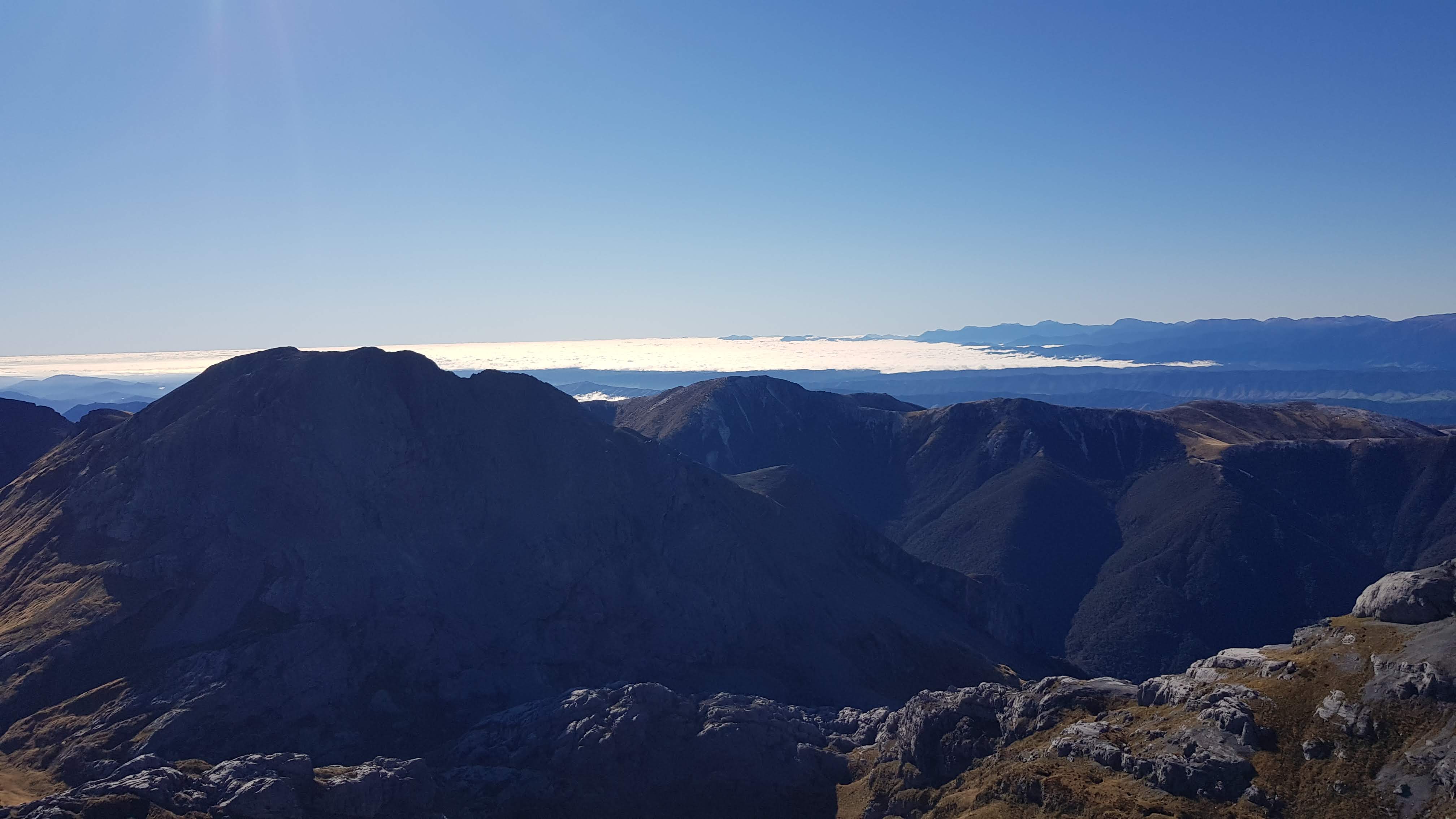 I had a decent nosey around up on top, then started down at 10.00 am. Things were much quicker upon the descent. I stopped at the tarns to pack up my tent and swap packs and continued down to Granity Pass hut. It took just under 2 hours to get back to the hut from the summit.

I enjoyed an early, sunny lunch at the hut and left just after midday. The first cliffs at the bottom of The Staircase rose above me at 12.55 pm and it took me 20 minutes of huffing and puffing to get to the top. It was great to meet a fellow tramper at the top, and have a chat and a bit of a breather!

I made a little note to myself to come up again and do a day walk up to Billie’s Knob. The views from up there must be incredible!

By 2 pm I was back in the beech forest at the first junction where the ridge route meets the Blue Creek route. I chatted with a couple of ladies eating their lunch, then took the Blue Creek track down.

For the first Km or so, the Blue Creek route was a cushion-soft downhill delight of a trail. As I neared the creek it became more rocky, slippery and narrow, and I made slower progress.

The birdsong in the forest was amazing! I saw robins, bellbirds, tuis and two huge, fat wood pigeons. Closer down to the creek I passed lots of trees with bright orange berries and wondered if these were what the birds were after. As usual, I scolded myself for not knowing what the trees were…

An hour later I was down at Blue Creek. I dropped my pack to run over the small bridge and 300m back up the creek to see the resurgence. There was a viewing platform overlooking a cliff and cave beneath but unfortunately, you don’t actually get to see the water coming out of the ground. Mildly disappointed, I headed back.

The trail back to the Courthouse Flat campsite was wide, gently undulating and very lovely. Along the way, there were numerous bits and pieces of historic mining machinery and accompanying information boards. I was glad I returned this way, it made a nice easy hike back to the van.

What a great couple of days! I’ll definitely be coming back to explore this area of the park again.